Firefighters are everyday heroes, always protecting local citizens from danger — whether they be human or animal.

On Sunday, June 6, the Virginia Beach Fire Department responded to a call about a fire in a high-rise apartment building. They needed to get any remaining occupants safely out of the building.

Brenon and firefighter Joseph DePalma entered the building and found it filled with smoke. In their search, they found a Siberian husky dog. unconscious on the 15th-floor. His owners weren’t there.

Thankfully he was still alive, but was completely limp and not breathing. He was in desperate need of oxygen, so the fire crew picked him up to carry him out of the building. Transporting a big, 100-pound husky down all those flights of stairs was no easy task.

The dog, named Igor was put in the care of Officer Frye and Officer McQueen of Virginia Beach Animal Control, who quickly administered oxygen with a mask. He had suffered smoke inhalation but thankfully did not have any burns or other injuries.

After receiving oxygen, Igor quickly regained. His family was notified, and he was transferred to Bay Beach Vet Hospital for continued treatment. 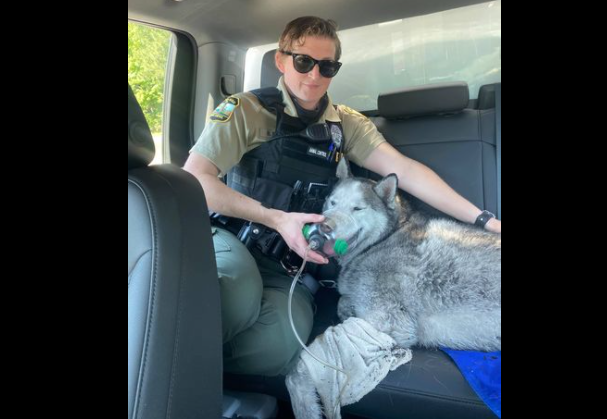 Thankfully, things are looking good for this lucky dog.

In addition to the fact that Igor got out safely, the Virginia Beach Fire Department reports that several other residents were taken out of the building without any reports of injuries.

Both Brenon and DePalma were very happy that they were able to help save the dog’s life.