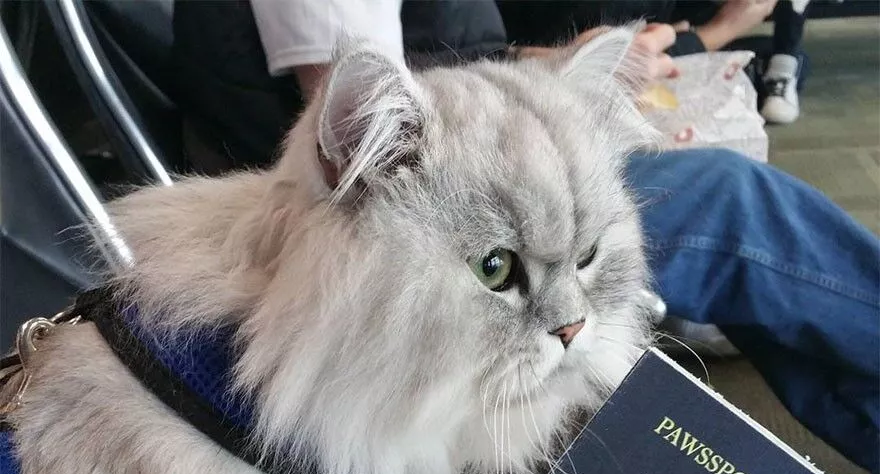 This is Gandalf, a 2-year-old Siberian cat who we believe deserves the title of Fluffiest World Traveler on Instagram!

Since being rescued from a pet shop that was closing in downtown Seoul, South Korea, this adorable cat has been on many great adventures around the globe. He was only 5 weeks old at the time and was suffering from a respiratory infection. He now lives in California with his humans and has visited 2 countries and 8 American states.

“He is an indoor-only cat with the exception of leash time,” said his humans. “We started taking him out with us since he was just a few weeks. He loves it! He gets the outdoor experience and we get to share in all of his adventures! He loves his leash,” they added. “As soon as we pick it up he runs to the door and sits down for us to put it on. He is a travel bug.”

Have a look at this great collection of 15 photographs that his humans hope will inspire you to share some of the worlds with your kitty.

1.  Here he is with his ‘pawssport’ which probably has more stamps in it than yours or mine!

2. He loves the beach and often enjoys clifftop walks.

3. Here he is in Austin, Texas, one of the many capital cities he has visited on his travels.

4. Gandalf can often seen sporting some rather trendy jumpers, he has purr-fect dress sense!

5. This adorable fluffy cat, who is a rising star himself, has visited the many stars that adorn the pavements in Hollywood.

6.  This indoor kitty totally loves the great outdoors and when at home runs to the door every time one of his humans picks up his leash.

7. And was totally overwhelmed by the vastness of the Grand Canyon where he went on a camping trip.

8. He recently checked out the old mines in Gold Bug Park where he got to smell new smells and learn a little about California’s history.

9. He really enjoys seeing all the new places and making friends with fellow campers as well as the local wildlife!

10. Here he is trying to bring Christmas to all the young kitties!

11. After a nice walk in the snow, Gandalf is ready for a nap…

12. On his many visits to the beach, he gets the opportunity to see places that no dog has ever seen!

13. The San Francisco Bay Bridge is just a drop in the ocean for a well-traveled cat like Gandalf!

14. He will soon be emigrating to New Zealand with his humans, where I’m sure there are plenty more adventures waiting for him.

15. His humans hope that all of Gandalf’s adventures will be an inspiration for you to share some of the worlds with your kitty.

ANIMALS 0 104 views
Associations keep repeating that identification, by tattoo or microchip, is their only tool to
Добавить комментарий Отменить ответ