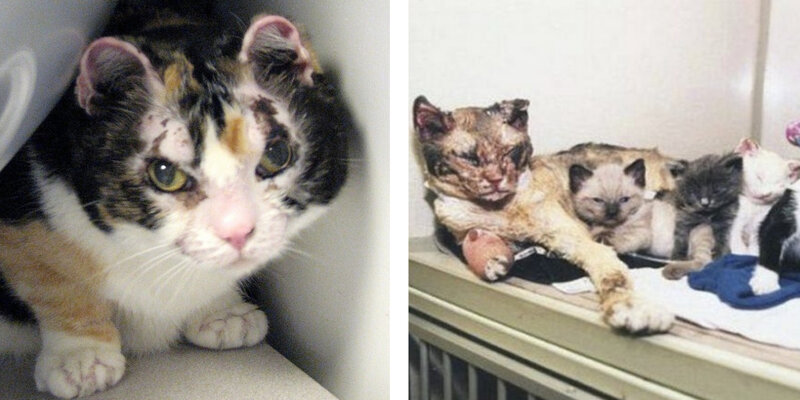 This story happened 25 years ago when a fire broke out in an abandoned garage on the outskirts. The team arrived on time. Then the firefighters noticed a cat that returned several times to the garage and to the farm to take turns carrying away its kittens.

The cat found shelter in the garage with five newborn kittens

However, one night the attackers set it on fire. Arriving firefighters tried to catch up with the cat, but it resisted and returned to the garage again. Then one of them noticed how the animal comes out with a kitten in its teeth. The mother heroine burned its face, ears, and eyes, but saved all its kittens.

Since it could only save them one at a time, the cat returned to the burning garage five times.

It received numerous burns and, after making sure that all the kittens were saved, lost consciousness. Fortunately, one of the firefighters took it to help.

Its fur has grown back

There was a lot of writing about this heroine mother on social networks, and there were many people who wanted to take the cat to their home.

In the end, it was adopted by the woman who cared for Scarlett, and this is the name given to the cat.