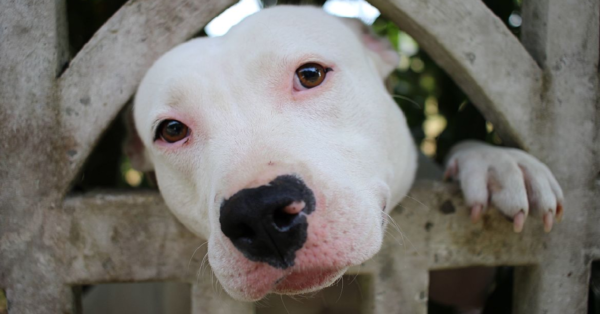 When rescuers received a call about a dog tied to the railing of the bridge, they quickly responded.

The man arrived at the scene with a package of treats, a leash, and some basic medical supplies. What he saw was incredibly heartbreaking.

Someone brutally tied a hose around the dog’s neck and used a piece of rope to attach the hose to the bridge railing.

The rope was so tight that the poor puppy couldn’t even move.

Although the dog’s situation was dire, help arrived and the dog seemed to sense it. Despite everything she had been through, she seemed incredibly happy to see a person and attract attention to herself. She had hope again!

The kind man carefully untied the rope and then removed the tube from her neck. The dog was securely fastened, but he managed to free her, and he checked her neck to make sure everything was fine.

She seemed healthy and even happy-especially being free!

The dog was treated and then she played a little in the grass.

Everything could have ended badly for the poor dog, but instead, she got a second chance at life. We are so glad that she can live freely and be surrounded by people who love her.