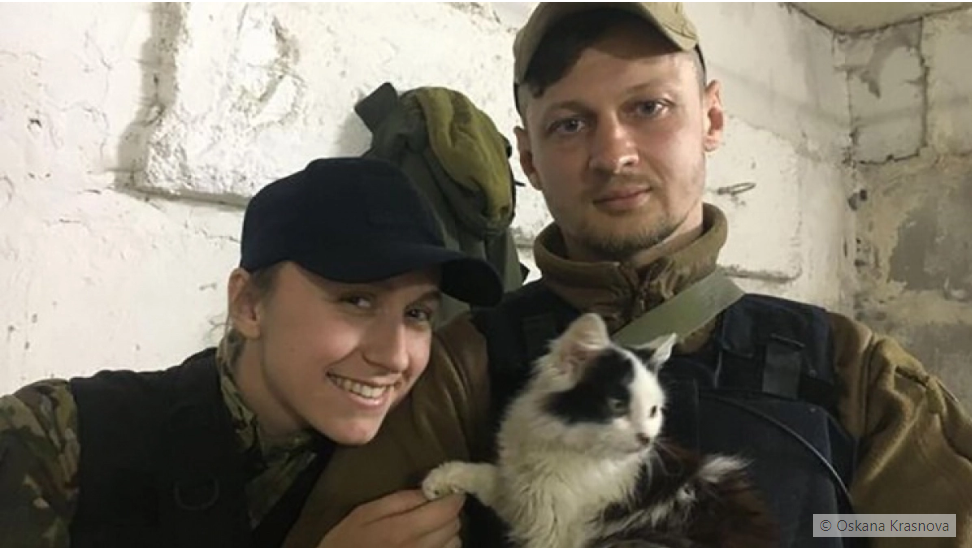 Oskana Krasnova and Stanislav Krasnov are fighting a relentless fight not only against the war raging in their country but also for animal welfare. Dogs and cats abandoned to their sad fate receive their love and care before being entrusted to associations with the aim of reuniting them with their owners.

Oskana Krasnova, 27, was a lawyer in Kyiv before war broke out in Ukraine. For 6 months, she and her companion Stanislav Krasnov, 35, joined the armed forces as snipers. They were deployed on the front line in the Donetsk region.

The couple has always been touched by the animals. So much so that since the beginning of their mission, they have saved more than 30 dogs and cats that they found while crossing the deserted villages. 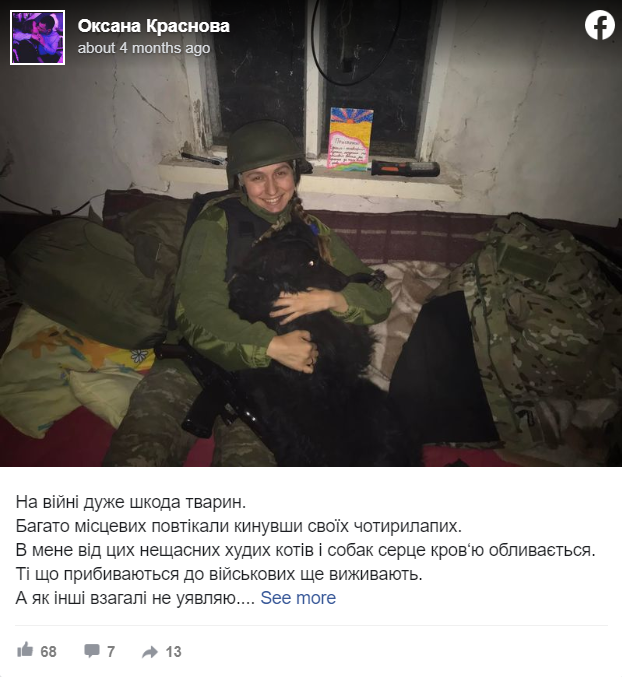 “I love animals very much and I used to help save some with my husband even before the Russian invasion. I come across a lot of abandoned dogs and cats when I do my work and I can’t leave them there. It is difficult to evacuate them from the front line, but these unfortunate creatures may have been accustomed to living with humans, so they cannot survive alone,” explained the young woman from the combat zone to Irish Examiner. 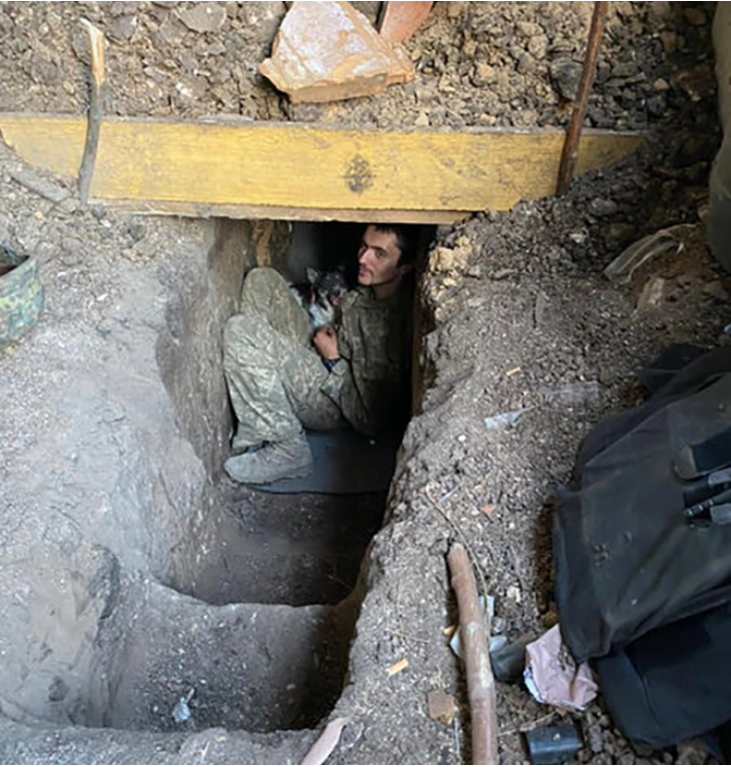 Oskana and Stanislav, therefore, collect the animals in their camp. In their free time, they provide them with care and give them all their love.

The couple pays for the medicines and all the food out of their own pocket.

The survivors are then loaded into military vehicles which leave for Kyiv and are entrusted on their arrival to local associations. These take care of finding their owners or finding them a new home, depending on the case. 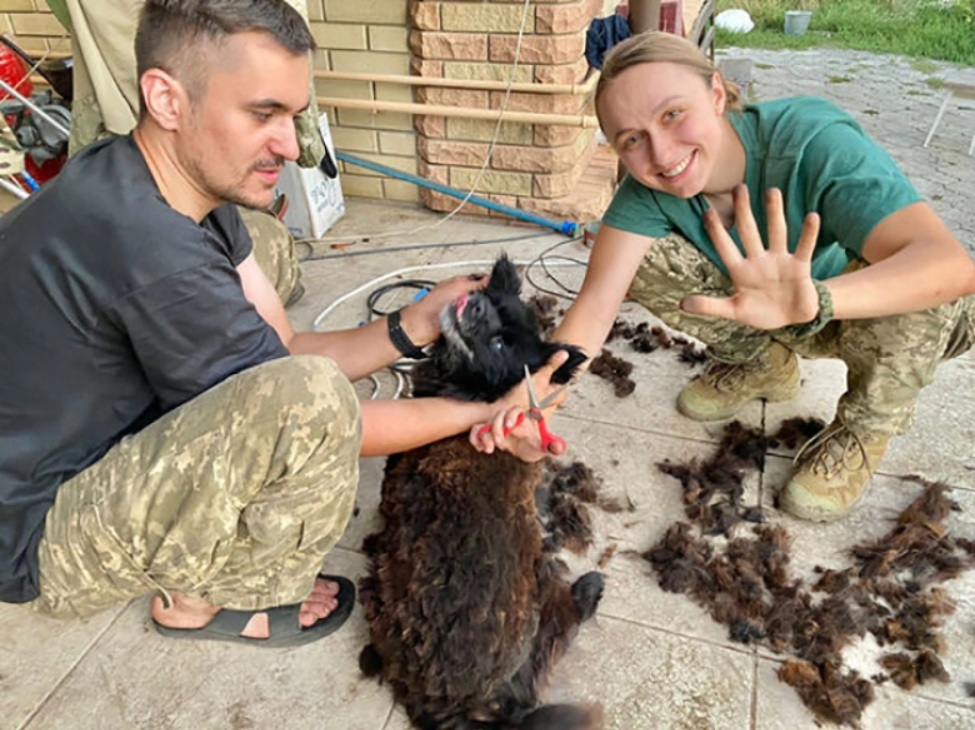 Oskana also recounted their first and most memorable rescue. The couple had heard low barking. Approaching, they discovered a small dog stuck in an apartment. She had survived for a month by eating raw potatoes.

“She was lying on the ground. We had to push her into a box and carry her in our military vehicle. She was having seizures and we didn’t think she would survive,” Oskana said.

But thanks to their care, the young lady recovered and today she has been adopted into a loving home. 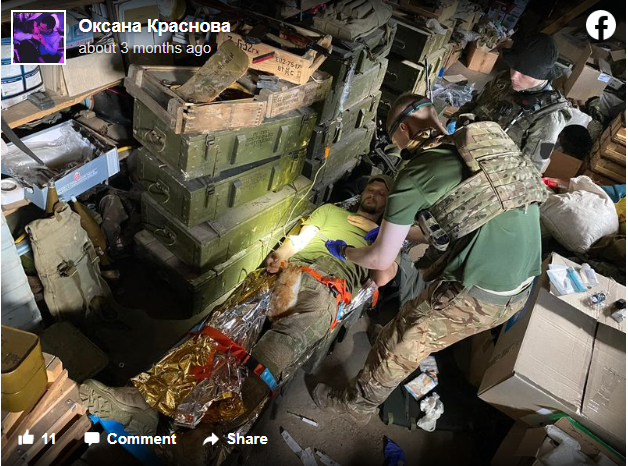 “The animals we rescue are very grateful and loyal. Sometimes it’s really hard to say goodbye to them because I spend a lot of time looking after them. But I also feel relieved for them,” concluded the young woman.