When it comes to comfort those who need it, the dog’s heart is always open. Whether it be other puppies, people, or animals of different kinds, the best friend of a human has proven it so many times that it can easily be called the best friend of everyone. So Sarge — a 9-year-old German shepherd couldn’t have been any other.

The kind doggy shows great compassion for orphaned fawns. The dog’s owner – Cheryl Stephen is such a big-hearted woman, always willing to help. Therefore lots of orphaned animals have been adopted by her over the years, including some adorable fawns. Even Sarge was very friendly with all the animals its mom has been fostering, it never showed so much compassion as it did whit Buckwheat. Buckwheat was the first fawn Cheryl adopted and since the moment Sarge met it, its guardian instincts kicked in. “Something clicked in Sarge and it took to Buckwheat instantly,” Cheryl told The Dodo. “It wanted to be involved with every aspect of Buckwheat’s care. It took on the role of being Buckwheat’s guardian.” 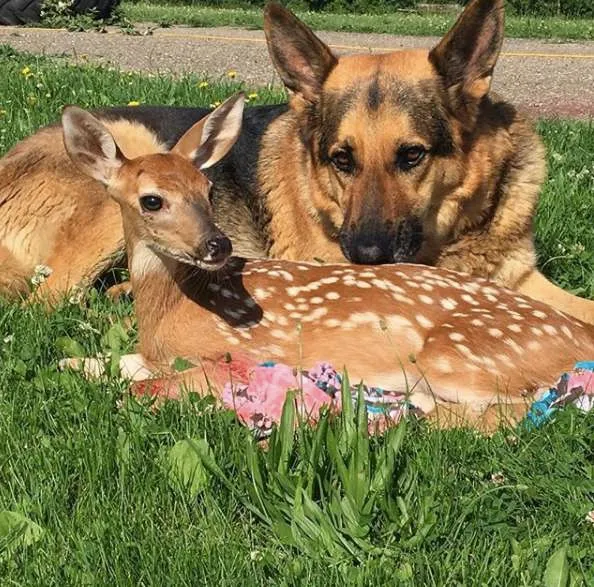 The kind dog started to act just like an “adoptive mom” for the tiny creature. It followed the baby everywhere, just to make sure nothing happens to it. “Buckwheat grew and began venturing out on its own a little more, we would have Sarge go find it and bring it back home,” Cheryl said. 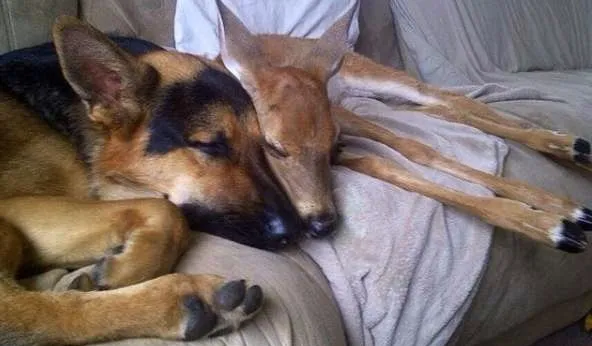 The once so helpless, Buckwheat grew into a strong fawn, so Cheryl knew there was time for it to be released in the wild. That made Sarge very sad and its mom feared it would never be so kind with other animals as it was with Buckwheat. But the selfless dog hurried to prove her wrong.

As Cheryl brought more orphaned fawns to help them rehabilitate, Sarge instantly shows its intentions. It’s in a hurry to babysit these lovely creatures. “When I walk in the door carrying a fawn, Sarge springs into action,” the woman said. “It wants to check them over and it will frantically sniff and nose around to determine their condition. The fawns are drawn to Sarge and feel safe in its presence.”