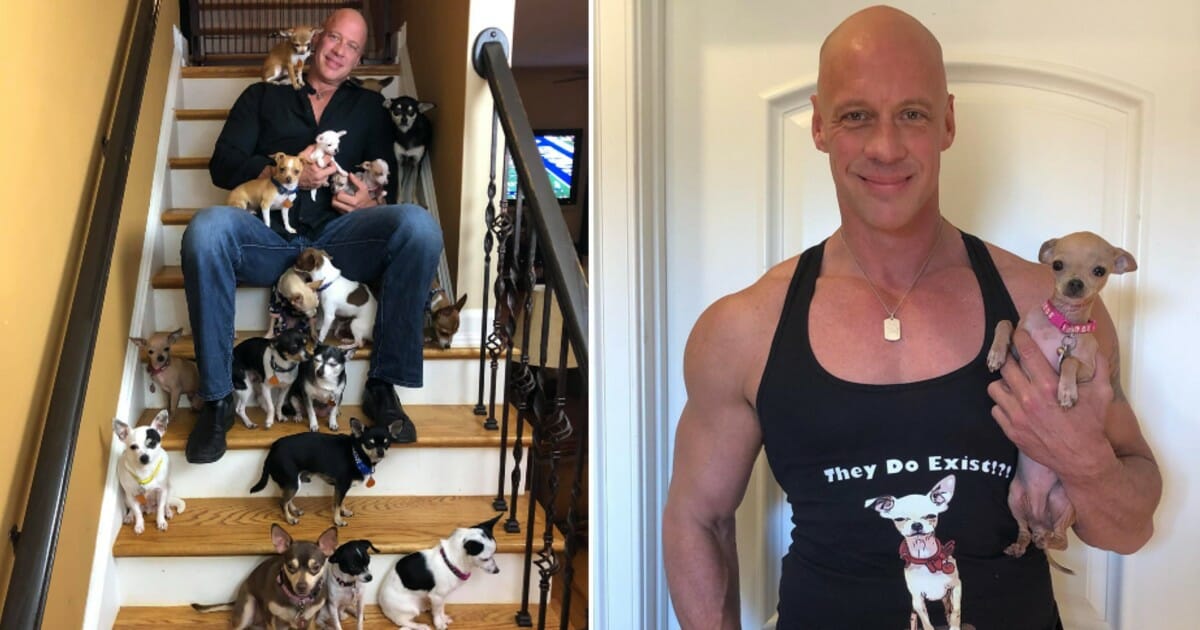 For years Bobby Humphreys saw himself as a “big dog guy.” Over 17 years, he had owned three Rottweilers with his wife. He laughed when his friends would walk their girlfriends’ tiny dogs. For him, it was all about the ego.

But when his marriage of 17 years suddenly fell apart and he fell into a deep depression, he put aside his ego. His decision to do so ended up saving not only his life but the lives of 30 Chihuahuas as well. One day Connie asked if Humphreys could watch her Chihuahua, Lady. She was moving and wasn’t able to take Lady with her.

Humphreys was hesitant. He felt that he owed Connie, but he also heard some stories about Lady that didn’t exactly make him thrilled about hosting a tiny dog at his home. Not to mention, Lady was a Chihuahua and Humphreys had previously made fun of men like him who had small dogs like Lady.

“Connie admitted that she was very protective of both her and her son and that she didn’t like people. Especially men. So, honestly, I just steered clear of her until this point,” he said. Humphreys agreed to watch Lady, and he was determined to do the bare minimum in taking care of her, but when he came home on the very first day he felt bad about her having to sit in her kennel so he let her out.

To his surprise, and Connie’s, Lady snuggled up with Humphreys and didn’t leave his side.

“I was missing a lot of work, I couldn’t get out of bed,” Humphreys told The Dodo. “The only thing that was keeping me going was Lady. I’d lay in bed all day with her, we’d play, we got so close. I fell in love with this little dog.” Humphreys knew that eventually, Lady would have to go back to Connie, so he started searching for a Chihuahua of his own. He found Kira, a one-year-old pup, who was untrained and undisciplined. She was a challenge, but it didn’t stop Humphreys from looking for another, younger pup.

He learned that Harley, a puppy he found on Puppy Finder, was from an unexpected litter, and a male puppy from a previous litter was being inbred with the mother.

“I started to see a pattern here,” he told I, Heart Dogs. “So many of these little beautiful babies are being abused or taken advantage of and I just couldn’t sit by and watch it happen.” Soon after he founded, Big Guy, Littles World Sanctuary, where he provides a home for “neglected, abandoned and abused” Chihuahuas.

Currently, he’s taking care of 37 tiny dogs, something he never would have dreamed of. “The feeling of love that these dogs give me, after what some of them had been through, made me say, ‘Well, now I’m responsible for them,’” he said. “They trust me and they look in my eyes and tell me that they love me so much.”

When Bobby found himself in a dark place, something that he used to make fun of ended up saving his life.

Now he’s responsible for saving lives and caring for over 30 Chihuahuas.

Share this article to show your support for Bobby and his incredible work for Big Guy, Littles World Sanctuary.