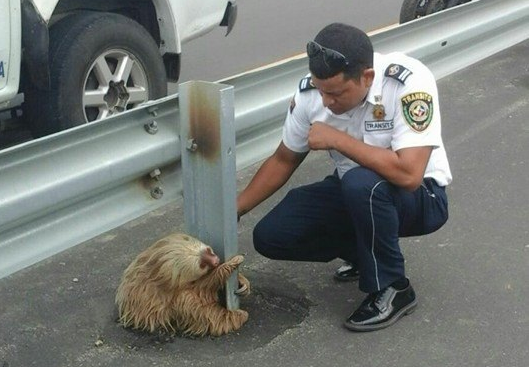 Imagine you are waking up in a totally different world with nothing familiar around you. Only the thought of it is terrifying. Sadly, this is what happens to so many wild animals due to habitat loss as a result of the human hand. And while having highways makes our lives easier because we are able to travel long distances in a very short time, for wild animals crossing a highway is – for so many times – deadly. Especially when you’re the slowest animal on Earth! Fortunately for this tiny sloth, a cop’s kindness was its second chance to live. Sloths are South America’s native mammals, known for their slowness and they usually spend most of their lives hanging upside down in the tropical rain forests. Therefore, when a little sloth saw itself stuck in the middle of a highway in Quevedo, central Ecuador, it instantly got frightened. However, what happened next turned into the most adorable rescue mission. The local police went to the scene as several drivers called the authorities to report the poor animal. When seeing the officers, the little one soon realized their mission it’s to help him so he tried to be as cooperative as possible. Needless to say, he kept a positive attitude the whole time. As soon as it got rescued, the scared animal was taken to a local vet for investigation. Luckily, everything was fine with the little one, and shortly after, he was released back into the wild. “We want to let you know the sloth was rescued and taken by officers to a vet who said it was in a good condition to be returned to its habitat,” the police wrote on Facebook. 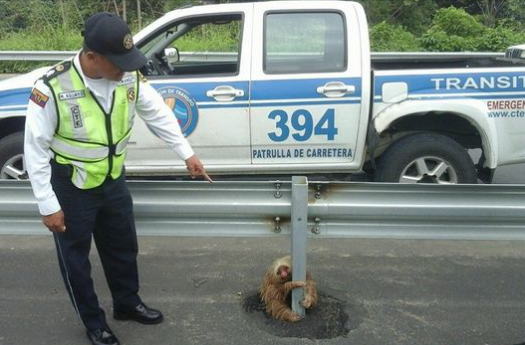 However, despite it being a happy ending story, why the little sloth was crossing the road, in the first place? Find out more about sloths in the video below!