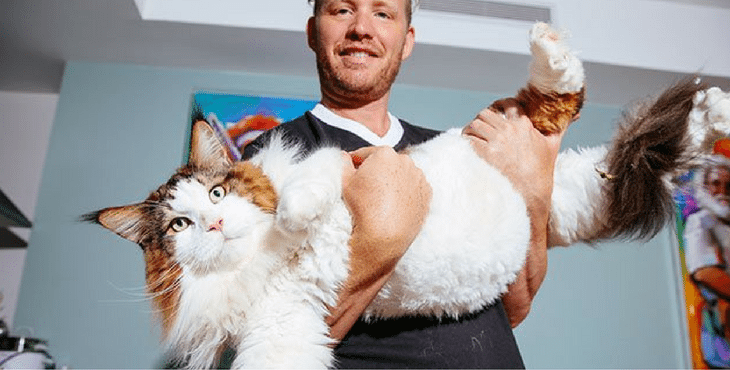 Everyone, meet Samson, New York’s biggest cat. The massive cat, also known as Catstradamus, lives with his owner Jonathan Zurbell in Williamsburg, Brooklyn. The 4-year-old mein-kun weighs a colossal 28 pounds and can stretch up to four feet long. Samson is almost as tall as some humans, but his owner says the cat is completely healthy and has a well-balanced diet, despite its unusual size. Still, many people have expressed their concern saying Samson is probably obese. Jonathan disagrees and says that the cat does pretty much everything an average size does. There’s one exception, though: Samson takes walks with his owner riding in a stroller. As far as behavior goes, Jonathan is proud to say Samson is a dream cat. The feline is apparently extremely loving and caring towards his owner and loves to cuddle on his belly first thing in the morning. Also, the cat’s extreme fluffiness makes him the perfect nap partner. Samson is the biggest cat known to the Internet so far. Zurbel has even challenged people who follow him and his cat online to find a bigger feline, but so far no one has stepped forward.

This is something you need to see to believe, so take a look: