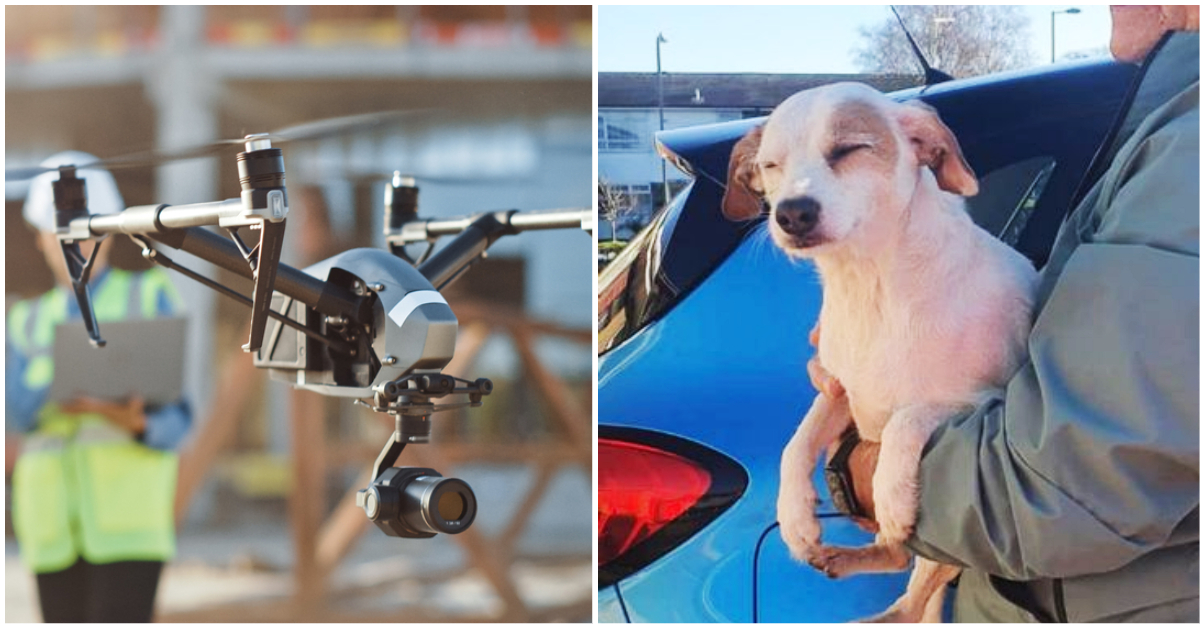 When a dog goes missing, people will do whatever it takes to bring it home safe and sound — even if it involves trying out some crazy ideas.

But sometimes these are the most extraordinary ideas that ultimately work best. This was the case recently when a missing dog was brought home with several flying sausages.

Millie, a Jack-Russell terrier, disappeared from her home in Hampshire, England after slipping from her leash, according to The Guardian. A frantic search began for the lost dog, and eventually, Millie was found — but unfortunately, she was in a dangerous spot: she was spotted on the mudflats, and was in danger of being swept in by the rising tides.

Time was of the essence, but Millie complicated the rescue attempts by constantly evading police, firefighters, and coast guards. Denmead Drone Search & Rescue joined the rescue effort, and while they were able to use their drones to locate Millie, actually bringing her to safety was trickier.

According to a Facebook post, they considered trying to catch Millie in a cage, but this was deemed too risky given the terrain. They also couldn’t reach her by kayak. But they had to come up with a solution fast, or the dog would soon drown.

“After employing the expertise of some locals, we were told if Millie wasn’t moved within a few hours she would have been cut off, and the area she was in underwater, with drowning highly likely,” the search and rescue team wrote on Facebook. “We had to think fast.” 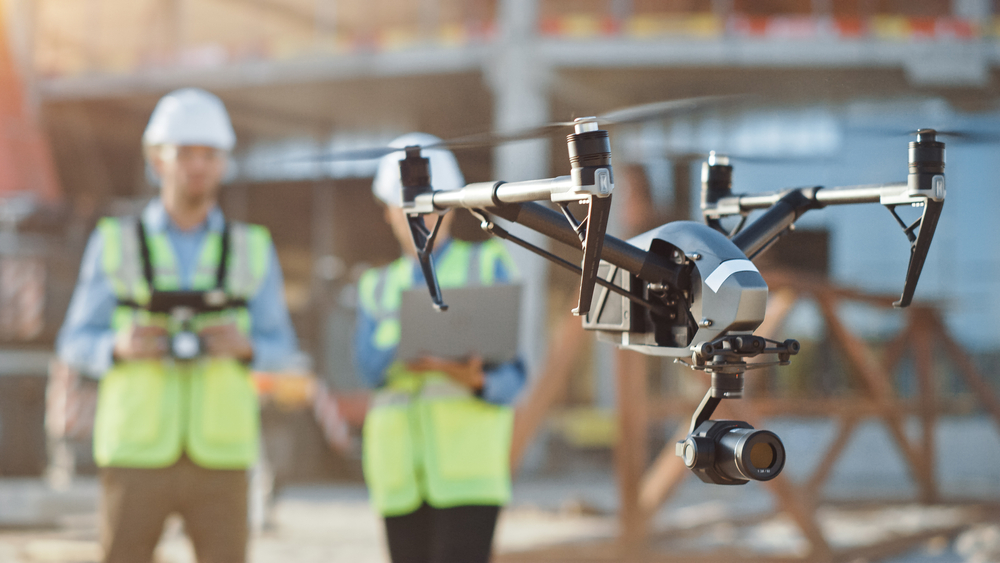 But then, one of the drone pilots pitched an ingenious but unusual idea: luring Millie to safer ground by attaching tasty sausages to the drone.

After all other attempts failed and with nothing left to lose, they attached 2 oz of sausage and gave it a shot.

“It was a crazy idea,” Chris Taylor, the chair of the Denmead Drone Search and Rescue team, told The Guardian. “One of the residents on the beach where we were flying from supplied us with the sausages – I think they were from Aldi. The woman cooked them up for us and we attached them with string.”

“It was something we had never tried before – the sausages were the last resort.” 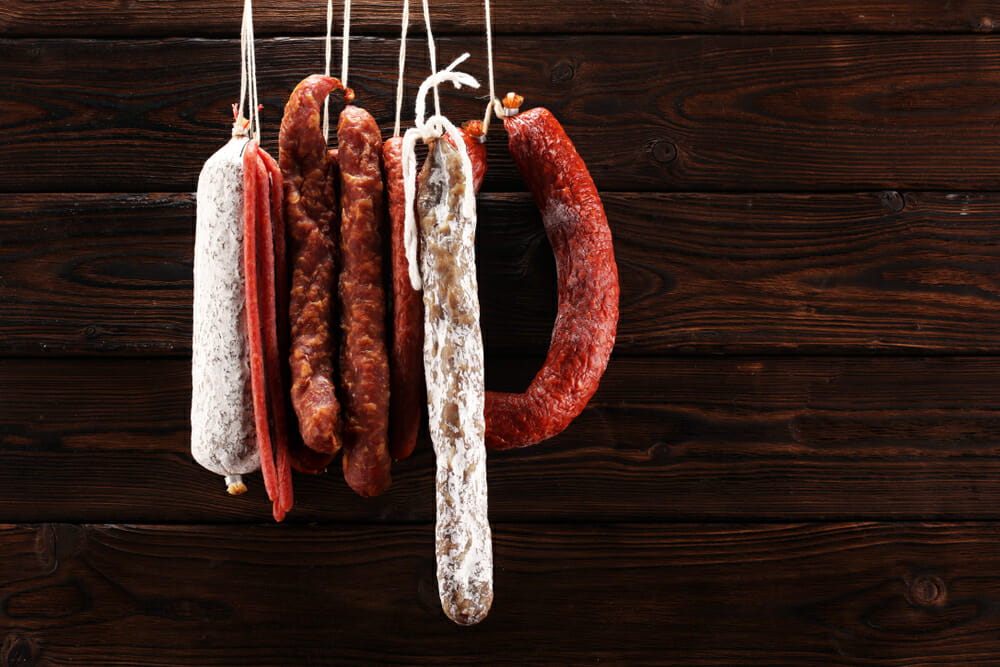 Amazingly, the plan worked: after a few days missing, Millie was hungry enough to go after the dangling sausages, and the drone operators lured her onto safer ground, saving her life just in time.

“We managed to lure Millie 300 m over into a safety zone,” the team reported on Facebook. “Luckily she stayed in that area so we had prevented her from possibly drowning.” 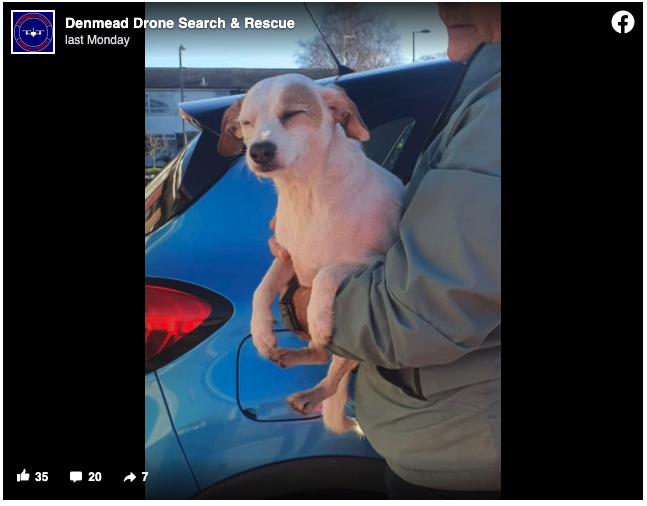 Millie was later spotted in an industrial area, and the owners arrived on the scene. Thankfully, Millie ran right to her owners, “tail wagging happy” as she was reunited with her family. “Millie headed home, and was off to the vets for her check-up Millie’s adventure was over at last,” the post reads.

It was an extraordinary, unusual ending to the whole ordeal, but Millie’s owner Emma Oakes wasn’t too shocked that it was food that brought the dog home.

“Millie likes food and she’ll eat anything you give her,” she told The Guardian. “Meat is her favorite food, so dangling a sausage was probably the best thing they could lure her with.” 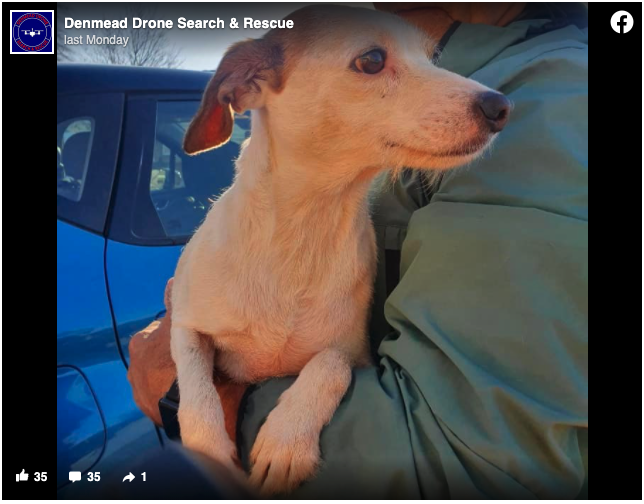 The drone operators agree: after such success, they plan to use another meat-dangling drone for future rescues, should the opportunity arise.

“We certainly would consider using sausages again,” Taylor said. “Every dog and search operation is always going to be different, but if we were ever in a similar situation again we would employ the same methods to lure the dog.”

It sounds like an unusual way to save a dog’s life, but never doubt how much dogs love food!

We’re so glad Millie is safe and home now! Thanks to everyone who thought outside the box to bring this sweet dog home!