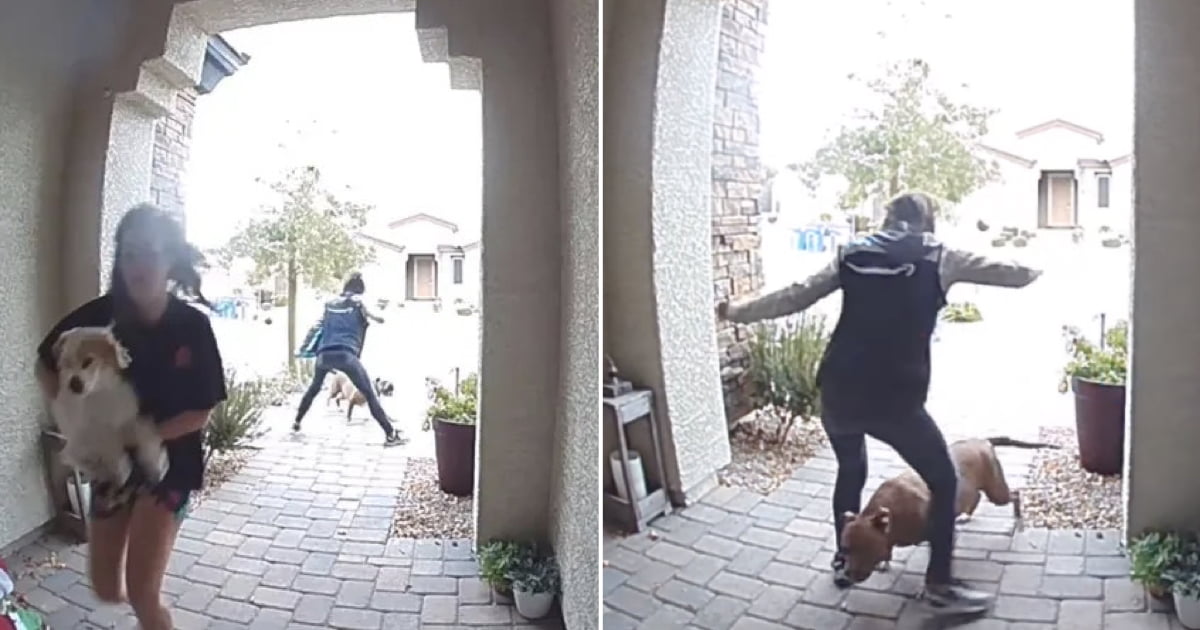 Michael Ray’s Ring camera recorded a video of his 19-year-old daughter, Lauren, and 9-year-old dog, Max being rescued by the driver when a larger pitbull came running up to the door.

“My Ring alert went off and I watched the entire situation unfold in front of me,” Ray said to FOX5 Las Vegas.

The video shows Lauren greeting the unknown dog which seemed nice and friendly at first, but Lauren made the mistake of accidentally leaving the front door open. This is when her dog, Max, runs out of the house.

The two dogs sniffed each other while Lauren nervously watched. This is when Max suddenly growled and jumped at the pit bull. The larger dog took this opportunity to attack Max, who quickly and easily slammed Max to the pavement below. 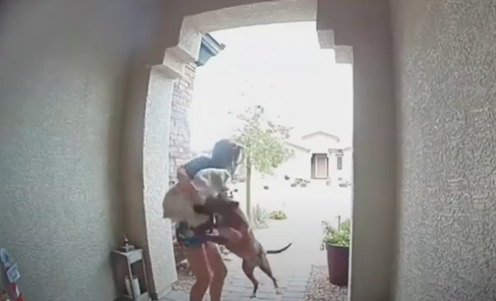 Lauren was able to scoop her family’s dog off the ground and pull him up into her arms. At this point, the pit bull was in attack mode and was in no rush to stop.

She began spinning around in circles holding Max up as high as she could while the pit bull jumped up and tried to bite Max.

She did her best to deter the aggressive dog but as the situation escalated, she began screaming for help. “Well, my first thought was to save the dog, you know, family pet. I would’ve let the dog bite me for all I care. I just wanted him to be safe because he’s so small compared to a pit bull. He didn’t stand a chance,” Lauren Ray said in an interview with FOX5 Las Vegas.

When Lauren began screaming for help, the Amazon driver lept into action and helped Lauren and Max escape back into their home. The driver then breaks off to go back to her truck, yelling “You’re a bad dog!” as she makes her exit. 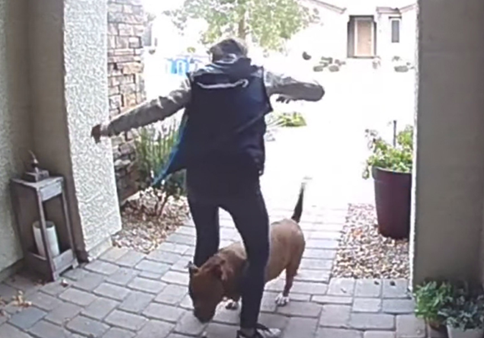 The driver, Stephanie Lontz, works for 702 Logistics, a local courier contracted by Amazon.

Michael had to watch the entire incident go down in real-time from his mobile phone on the ring camera app.

“As a dad, you know, panic mode, I’m a half an hour away from the house. It’s like I’m watching a football game and screaming at it. I’m like, ‘Get in the house, get in the house!’” Michael said.

A neighbor watching called the police, which called animal control who confirmed that the pit bull was picked up and safely removed from the neighborhood. As for Max and Lauren, they were both shaken up but OK.

In the original Facebook post, Michael showed the family’s gratitude by writing “She could have easily stayed back, she saw how aggressive the dog was, but came flying in to help without a thought of her well-being. Plus her telling the dog he was a bad dog at the end of the video is classic!”

According to the local news outlet KVVU-TV, the Ray family was able to track down Stephanie Lontz who helped save the day. On Friday, December 17 the family got to meet and thank Lontz in person with a bouquet. “Phew…the screams made me think of my child. I would only hope someone would jump in and help her if she was in a similar situation. I wouldn’t even think it’s motherly, it’s just- it’s the human thing to do,” Lontz said.

Lontz added she would hope that someone would do the same if it was her child.

Michael Ray said she saved two people and two dogs that day. His neighbor was out walking his dog when that dog attacked his dog, he had to kick him out of the way and he kept coming back