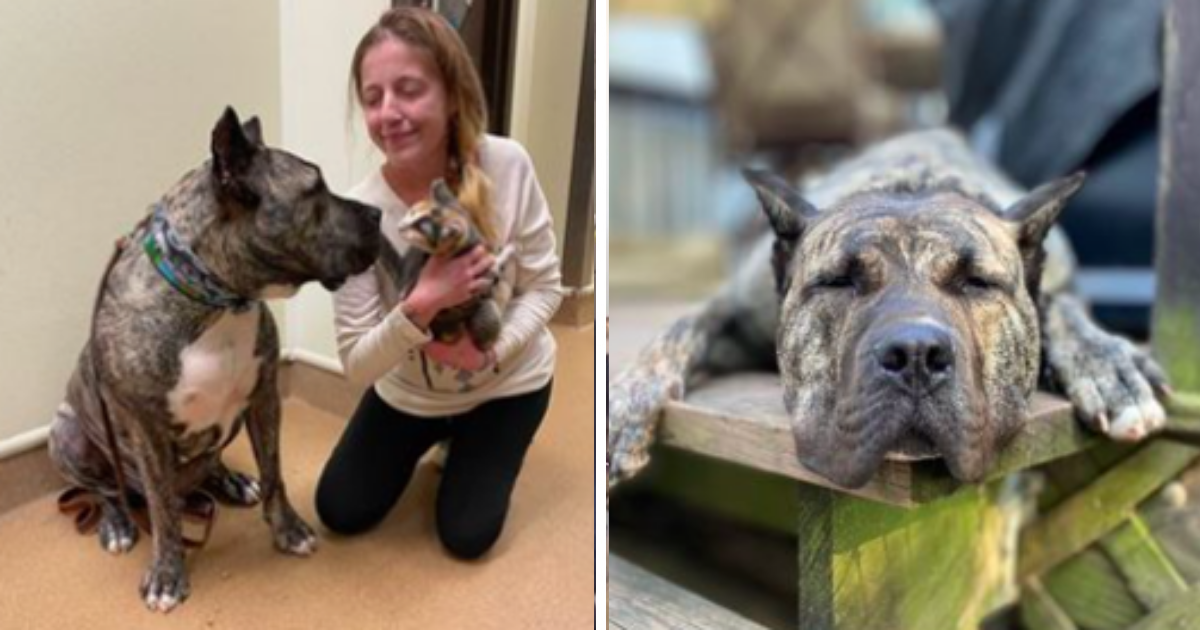 Almost one year ago, on the brink of death, a malnourished dog was dumped in the Kentucky Humane Society parking lot in Louisville, Kentucky. Somehow, a passing car filled with generous people who had just donated some items at KHS saw some movement from under a dirty blanket and told the workers inside.

The staff located the unordinary Presa Canario Mastiff that weighed only 38 pounds. This kind of breed should have weighed over 100 pounds. Staff at the Kentucky Humane Society said that he was the thinnest dog they had ever seen on the premises and estimated that he had less than a 10% chance of survival. 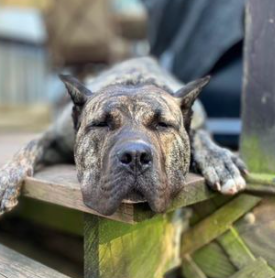 Vets did all they could do to restore his health, and somehow the small pooch was determined to survive. The staff named the dog Ethan, which means strong-willed in Hebrew. Ethan defied all odds, getting stronger and more stable with each passing day spent at the vet.

Word of Ethan’s recovery spread quickly among the community in Louisville. People were so enthralled with his life, that the Humane Society staff began posting daily updates of his progress on a site called Ethan Almighty.

Soon Ethan had amassed a following of tens of thousands across the globe that were rooting for him.

During the time Ethan spent at the humane society, he stole many hearts, including one employee, Jeff Callaway. Callaway began fostering Ethan in his home, and shortly after officially adopted him on March 10.

Only 5 and a half weeks from that fateful day of being dumped in the parking lot, Ethan received a second chance at life. “Somehow he survived, has thrived, and has been an inspiration to thousands of people around the world.” Callaways told Southern Living.

Callaway also told Southern Living that he was a very private person before Ethan came into his life. After adopting Ethan, Callaway began posting about Ethan on the Facebook and Instagram pages that are dedicated to the pooches’ journey.

He knew it was his duty to make sure that everyone who loved and supported Ethan through his healing could continue to follow his life now that he found his forever home.

Letters began pouring in from people all over the world whose lives have been changed, and in many cases, saved, all thanks to Ethan.

Callaway said that one person sent a letter saying that they were diagnosed with cancer and decided to not receive treatment, but after hearing about Ethan’s incredible recovery, she was inspired to fight and is now cancer-free. Other letters revealed that they were in depression or on the verge of suicide when they came across Ethan’s story on their Facebook feeds. They said Ethan provided the unexpected glimmer of hope they needed to keep going.

“I think his story came when so many people were stuck at home watching nothing but sad news,” Callaway said. “He came along, and I think people thought, ‘Here’s another sad story.’ And day after day, he lived. He struggled, he fought. And he kept living. He brought inspiration to people. He brought hope.”

Not only does Ethan inspire humans, Ethan is said to also be a blessing to his fellow four-legged friends. Ethan has now been going to work at the humane society with Callaway every day.

While Callaway works, there is also a list of stuff to do for Ethan so he does not get bored. Ethan spends much of his day in the vet service area, interacting and comforting the sick animals who are recovering from spaying/neutering to limb removal.

“He loves all animals,” Callways said “Cats and dogs alike.”

Ethan has even helped to reunite lost pets with their owners.

Recently, Ethan met with Frankie Mae, a 1-year-old cat who had escaped a house fire and was taken to the humane society for treatment. A friend of the cat’s owner saw a Facebook post of Frankie Mae with Ethan and then alerted her friend that her cat had been found. 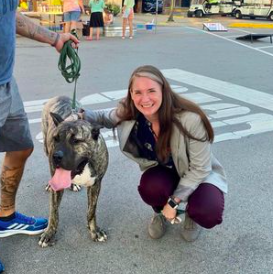 With everything that Ethan has been through, Callaway says that he has never shied away from people or shown anything but love to everyone and anyone he meets.

“It’s like he understands now that his job is to give back,” Callaway said. That probably sounds crazy, but he’s a special soul. He’s a constant reminder to me to think of others and always give back more than you take.”