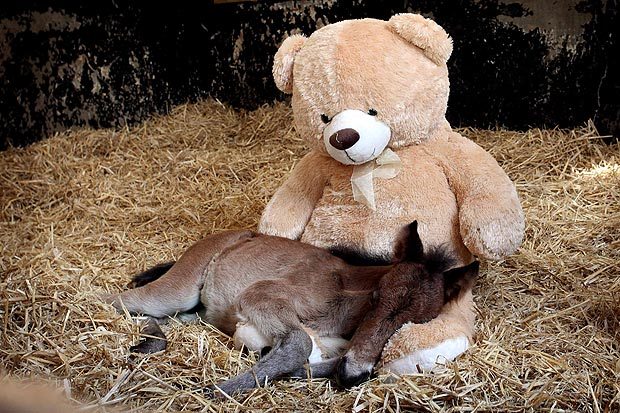 A rescued foal has the most heartwarming bond with a giant stuffed bear!

Breeze how he’s named was abandoned by his mom, shortly after birth. Fortunately for the newborn Dartmoor Hill pony, a farmer found him and alerted the Mare and Foal Sanctuary in Devon, UK. By the time the rescue team arrived at the scene, the newborn foal was in a deep state of distress. He was confused and dehydrated and everyone feared for the worst. But as soon as they brought him to the sanctuary, everything looked better, as the baby found the comfort he needed. And it wasn’t from the foster mother or the staff, it was from a giant teddy bear that the caregivers gave him.

«Unfortunately, little Breeze doesn’t have a mother to keep him company,» said the CEO of the sanctuary, a person named Syra Bowden. «It was wonderful to see him interacting with his new teddy bears and snuggling up to them when he went to bed. They are an excellent company for him and provide comfort during the short periods when his guardians are absent». The orphanage very often gives plush toys to animals who have been orphaned. «We always give our orphaned foals a giant nice toy as a companion,» said Bowden. «Animals are exactly like human babies, in the sense that it gives them comfort». A method that seems to work pretty well! As for Breeze, after a couple of critical weeks when he received a special milk formula and proper medication, he’s feeling very fine now. And his teddy bear friend is responsible for that, too. “He’s growing bigger and stronger by the day,” Bowden said. “He’s just started to go out into the field to play — he’s not scared of anything and loves being outside.”