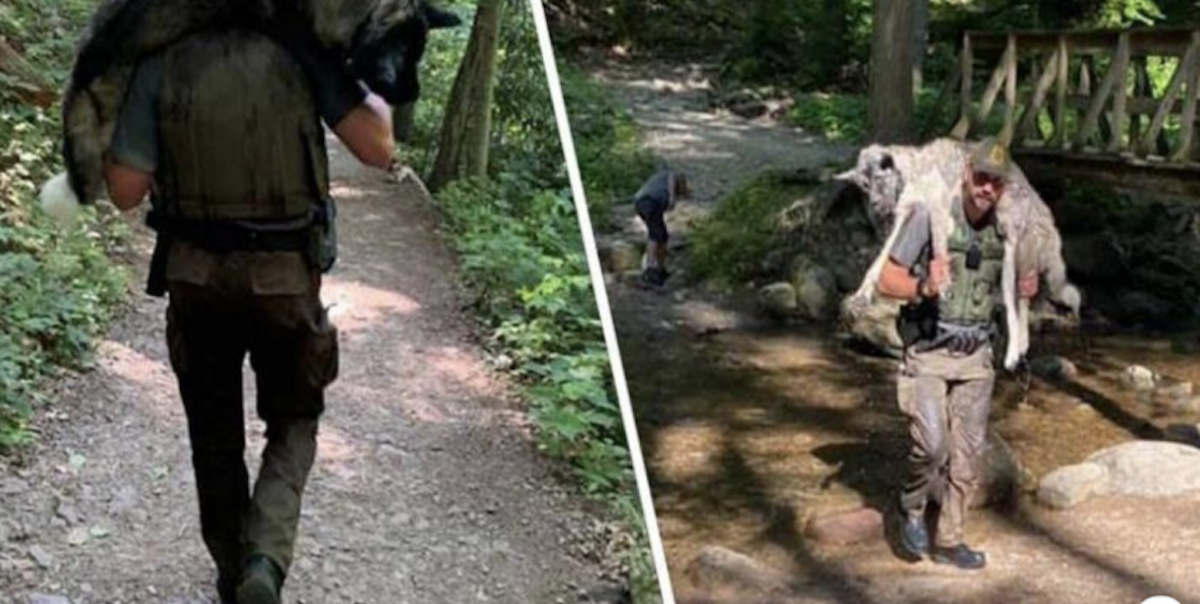 A wonderful park ranger made a herculean effort to save the life of a German Shepherd who’d been afflicted with heatstroke while out on a hike.

The pup and his pet parent were enjoying a hike of Mt. Tammany together when the pup began overheating. The pup soon lost the ability to move, and simply laid on the ground, panting.

A group of hikers came across the distressed owner and the ill pup and quickly rushed to help them, but there was little they could do.

The hikers offered the pup their water, but things were not looking good for the poor pup. The small amount of water they had would not be enough to get the pup’s temperature down enough to save the dog’s life.

They needed a miracle, and luckily they got one – in the shape of K. Salapek.

The owner was too tired to carry the giant dog alone from the dangerous mountain road, so he immediately called the local park ranger and reported his whereabouts to ranger Chris Sarapek.

As soon as he noticed the emergency, Sarapek took action and soon found them on the trail. Sarapek knew there was a cold stream further down the mountain, and if he could just take the puppy there, he might be able to cool it. Sarapek then lifted a 100-pound German Shepherd dog from his shoulder and began a difficult descent.

“It was a long route-a few miles down an incredibly rocky road,” Daniels told the Good News Network.

When they finally reached the stream, Sarapek put his exhausted puppy in the water. The water was kneeling next to him, pouring water over him. This allowed Sarapek to cool the puppy enough to survive the rest of his journey. After cooling the puppy, Sarapek lifted the tired puppy over his shoulder and began to return to the street.

The road was rocky and tiring, and the 100-pound dog pushing him for over an hour must have felt like a lead, but Sarapek just kept fighting-he could think of a dog. It was just to save.

And after a long and difficult descent, Sarapek finally arrived at the foot of the mountain. The puppy received proper care and overcame terrible challenges-all thanks to Sarapek’s heroic efforts.

Pediatric nurse Daniel posted a good deed he had just seen on Facebook, which became viral. At the time he wrote this, he received over 50,000 likes and 35,000 shares. Fortunately, Sarapek arrived on time to help the owner and his dog. Some commentators described Sarapek’s actions as brave and tough. In addition, most people, including Daniel, believed that his heroic rescue deserved great recognition.

Now the puppy is safe at home and his family is forever grateful to Sarapek.

Not many would have had the power and determination that Sarapek showed in the mountains that day, and he is none other than a hero.

He is highly regarded by the public and deserves all the love and gratitude he has received.