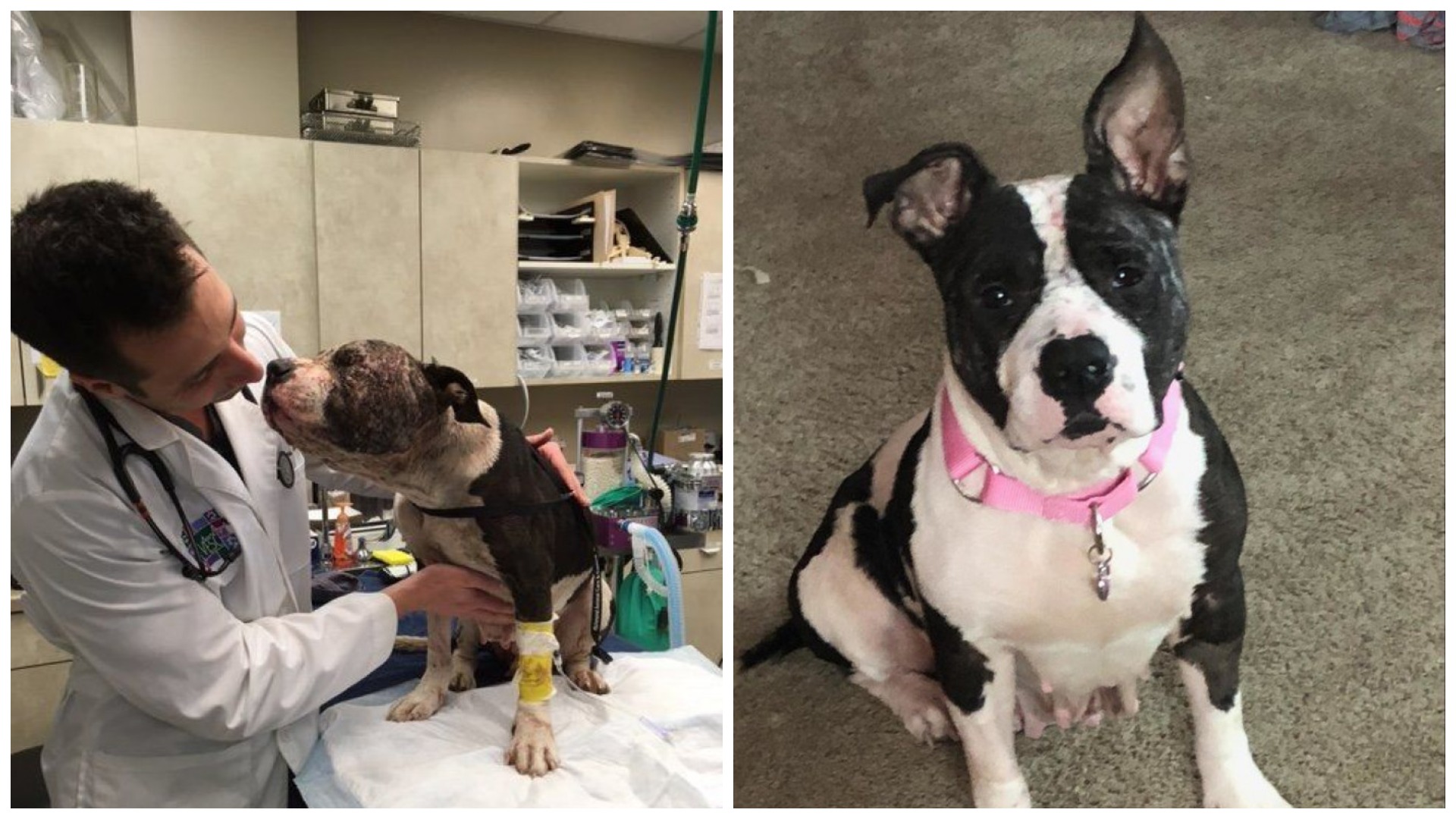 It was extremely cold in December, especially on the 12th of December 2017, when officer Barbara Jones from the Richmond Animal Care and Control responded to a call she received about a dog that was seen laying in the bushes.

When officer Jones arrived on the scene all she saw was a blanket that was covering a dog. She then uncovered the blanket and what she saw shook her. “When I pulled that blanket off and saw how swollen the dog’s face was, I was shocked and surprised,” Barbara told The Dodo.

She knew that the dog was in critical condition as the little thing was heavily injured and almost frozen to death. She knew she needed to get it to the Virginia Veterinary Center as soon as possible if they were going to save her life.

Warning: Some images may be disturbing for some viewers

The dog was a pit bull mix around 3 or 4-years-old. She had severe bite wounds all over her face. Some of the wounds were still fresh, but some were old and it infected her whole face.

Her eyes were badly infected and swollen shut she couldn’t see out of them and the veterinarians were scared she might not ever see again if she survived all the infections, including her body that was half frozen.

They named her Penelope, which is a very fitting name for such a beautiful dog. No one knew where she got her bite marks from or who left her in the bushes, but they realized that the bite marks were consistent with those of dogfighting.

She was sedated so that the veterinarians could start treating her wounds. She went into surgery with Dr. Eduardo Mercurio, which found out that she had holes and fractures in her sinuses.

He also treated the wounds around her eyes. That made the swelling stop and the poor baby could finally see again!

Next up was Dr. Sam Babbitt from VCC who specializes in oral surgery and dentistry. When he evaluated Penelope he saw that her lower jaw was fractured, most of her teeth were crushed and broken off and the holes they realized she had in the first surgery had moved along her mouth and nasal cavity.

Dr. Babbitt repaired all the damage through surgery and Penelope was getting better by the day!

Penelope surprised everyone by growing stronger and stronger. Two RACC volunteers took her out for some ice cream as she got spaded that day and she needed some treats to cheer her up.

“She seems to focus in on all the good she was now surrounded with,” Amy McCracken told The Dodo, “instead of withdrawing from humans.”

It was a good day for all of them!

When Penelope was strong enough they started to search for her perfect forever home.

And boy did they find it!

On the first day of 2018, Penelope was adopted by Kelli Rice and her daughter Addyson. They lost their beloved doggo of 16 years just before Christmas. They followed Penelope’s story on Facebook and they immediately fell in love with her. She was perfect for them, just what they needed after they lost their dog.

She has been with the Rice family for three weeks now and they only have the best things to say about her! She was already house trained, Kelli didn’t need to teach her and she can sit and give paw like any other dog. Penelope is happy and so is the Rice family and Addyson says, “She loves belly rubs!”

Penelope still has a long road ahead of her, but she is busy healing and her fur even started growing back. She will be started on heartworm treatment in February, but for now, she can just relax and enjoy her new home.

Kelli Rice told The Dodo that it’s difficult and sad to think about what happened to her, but the scars make her beautiful and unique, “She is the best dog ever.”