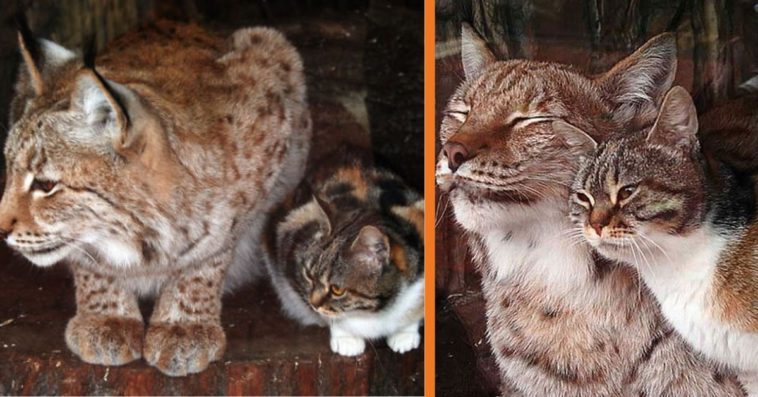 It doesn’t seem to matter what species of animal you are, friendships often develop. We have seen a lot of interspecies friendships, and these two are another example of this.

A homeless cat snuck into the St. Petersburg’s Zoo in Russia. She was hungry and alone and was lucky enough to stumble upon some much-needed food and water. The only catch was that the food and the water belonged to a much larger European lynx. It turns out, the cat got much more than it initially bargained for, with a new best friend.

Watch this adorable video of them cleaning each other!

“It seems as if the cat needs the lynx as much as she needs her”. People explain that the cat considers the lynx to be her mother. This is because she was just a kitten when she started this unusual friendship. After seeing this unique friendship, the zoo adopted the cat so they could live together, as they still do. The lynx is considered a medium-sized cat and is about twice the size of a house cat. The lynx is commonly known as a solitary cat that hunts at night to avoid being seen. These exceptionally skilled hunters can spot a mouse from 250 feet away. Clearly, though, this lynx has a soft spot for other creatures in need. Although lynx have been known to eat prey as large as deer, birds and other small mammals, their main cuisine of choice is snowshoe hares, which make up around 90 percent of their diet. The lynx is often hunted for its gorgeous coat. By purchasing fur coats, scarves, and other accessories you play a role in the killing of these gorgeous, loving creatures. Be kind to animals–faux fur is way cooler!

Here’s another adorable video of them playing and cleaning each other: