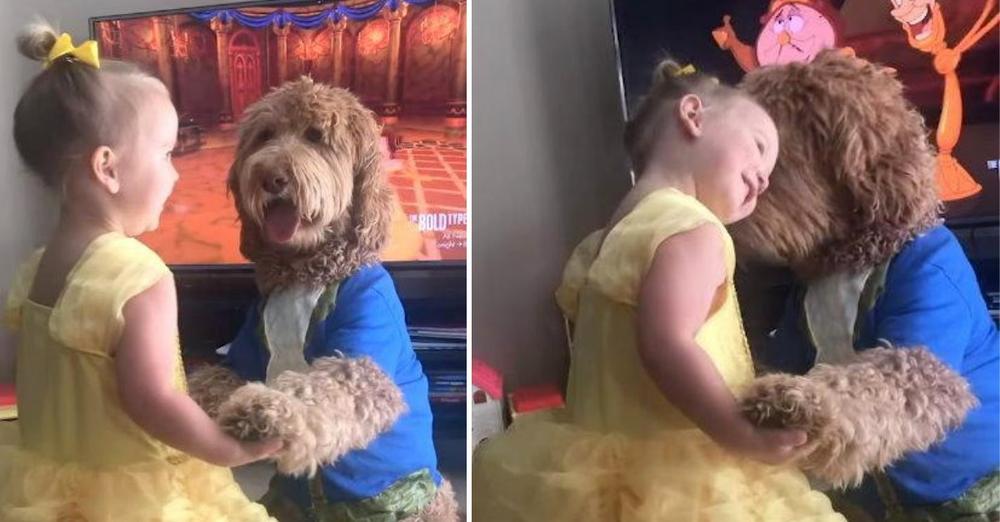 Disney’s original animated Beauty and The Beast movie-inspired leagues of children in its year of release in 1991. While there are swarths of grown-up Belles who have since become adults, you may be pleased to know that the inspirational power of Disney films never dies.

When three-year-old Kaylee wanted to relive the iconic dance scene, she had an obvious dance partner.
Of course, Rudy the Goldendoodle was in no position to say no to Kaylee when she decided that now was the time to reenact what is obviously one of her favorite scenes. She takes Rudy’s paws in her hands and in front of the screen plays the scene, singing the song “Tale as Old As Time” with them both clad in their best character costumes.

Looking at the Mom filming, he seems to have some questions.
To be fair, we know this is Kaylee’s favorite scene, but it may not be Rudy’s cup of tea. Having said that, this must not be the first time he’s been roped into performing such a number as he seems at home with his dance partner. Who knows, maybe he’s actually a big fan of the Beast.

Rudy has the complete look! He’s got wavy brownish hair, a spiffy blue outfit with a jaunty, crisp white shirt. He doesn’t seem to know the lyrics quite as well as Kaylee does, however.

“Are you sure this is how it’s done?”
Looking back over to Mom, he does seem a tad unsure as to what it is he’s supposed to be doing right now. If only he were facing the other way, then he’d be able to check the screen! But alas, it seems as if the whole point is for Kaylee to face the screen. Meanwhile, Rudy just gets to smile and look pretty. 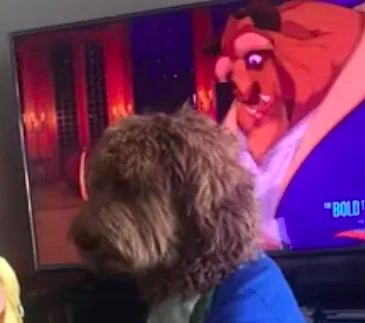 What a sweet moment.
Being cheered on by Cogsworth and Lumière, Kaylee decides that this is the moment to lean in for that big cuddle. What a lucky girl she is to have such a patient dog to indulge her in her sweet daydreams.

Although he still gets weary!
Despite his best intentions, Rudy still eventually becomes overcome by the sleepies, and a big yawn cracks his face. Can he hold it together? Can he manage to keep the magic alive with Kaylee? Or will this Beast become too tired to continue with his Belle?

Sadly, it seems like he’s had enough.
After spending enough time as The Beast, Rudy drops his paws and moves on. Still at the moment, however, our Belle still has giant hearts in her eyes for he best friend, and dance partner, Rudy the Goldendoodle. Even though Beauty and The Beast have recently been remade with Emma Watson and Dan Stevens in the titular roles, I propose a re-remake with these two worthy replacements.

Watch the full video below to enjoy this adorable duo!
Please SHARE this with your friends and family.