A stray dog was spotted on the side of the road. When the volunteers approached the animal, he got excited, but after looking at the people a little and realizing that they would not harm, the dog calmed down. 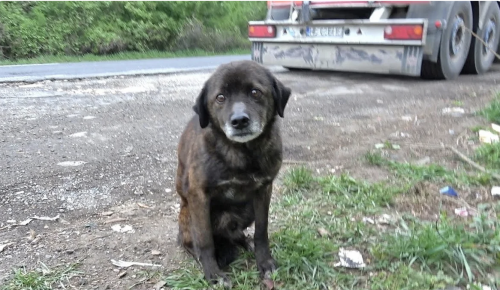 The dog was standing close to a busy highway, the volunteers were worried that they could scare him off with their movements, and then the animal would simply run under cars passing nearby.

In order not to take risks, people offered treats to the dog, luring it as far away from the roadway as possible.

The dog was nicknamed Mowgli because he looked like he was lost on the streets he didn’t know.

As soon as the dog decided to approach the people, the volunteers immediately took him to the car.

As it turned out, the help came on time – a strong wind, which was getting stronger by the minute, very soon turned into a real storm.

When Mowgli was brought to the shelter, he was terrified of everything and hesitated to leave the safe passage.

The shelter staff did not push the animal, but simply left the door of the carrier open, allowing the dog to get used to the new environment and go out himself.

After a few minutes, Mowgli took the first timid step outside and approached the bowls of food.

Volunteers could hardly hold back tears realizing that the dog decided to trust them and their care.

Mowgli was examined by a veterinarian, the dog received the necessary treatment.

Now the dog lives in a shelter, but some habits from his past life still remain.

Mowgli does not eat the most delicious pieces of food right away, he carries them to his couch.

This is how the dog’s innate survival instinct manifests itself – the animal hides food to protect himself from other predators and eats later.

The veterinarian determined that Mowgli is about 8 years old.

This is a serious age for a dog, but this dog’s life is just beginning and his eyes are shining with love and anticipation of happiness.
0 293 views
Like this post? Please share to your friends: