A woman living in Chicago left her house one day and saw a cardboard box on her doorstep. She opened the package she found and saw a tiny kitten. The animal was distinguished by its black-and-white color and huge bottomless eyes.

The condition of the cat was poor. It was clear that it had not been treated before. The baby had some kind of neck injury, so the woman immediately took it to the vet. The hospital stitched up the wound, and the doctor examined the body. 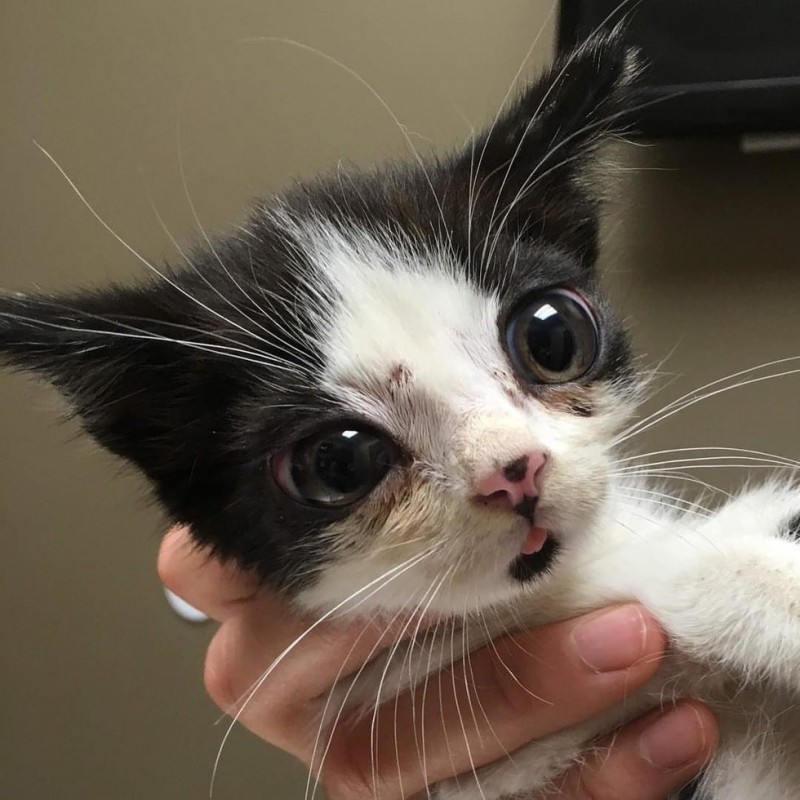 « When the baby was first brought, it was very shy and scared, but then the situation changed. After a few days, the cat began to play and frolic. Its appearance was unique. It seemed that the kitten consists of huge bottomless eyes and its feline disposition, » says the veterinarian. 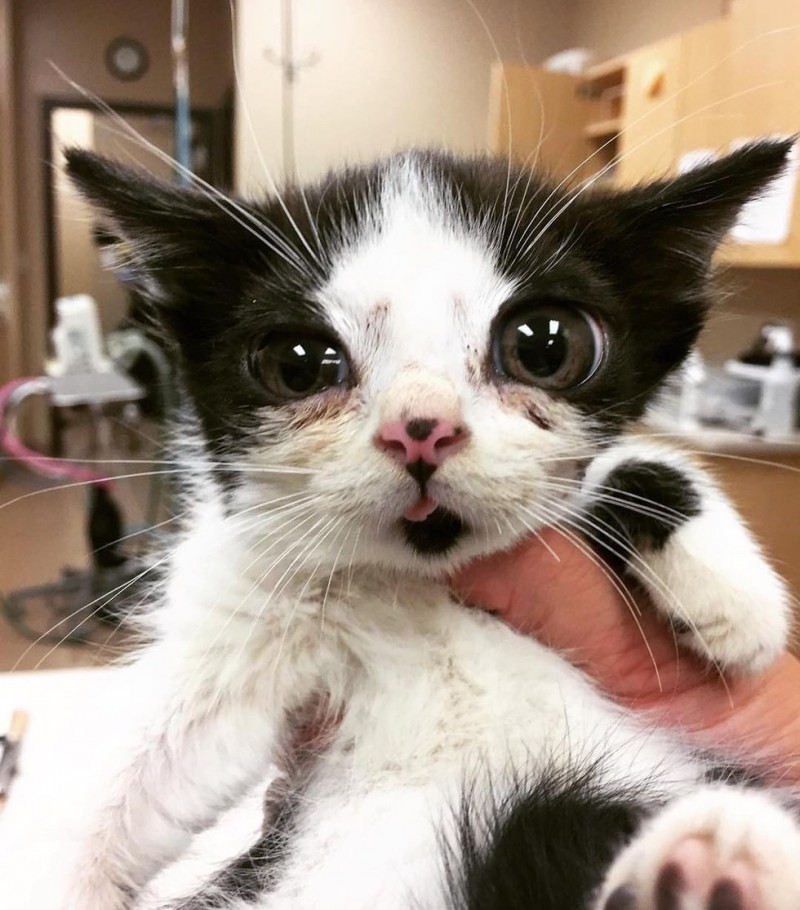 The veterinarian liked this cat very much. The doctor couldn’t stop thinking about his little patient. 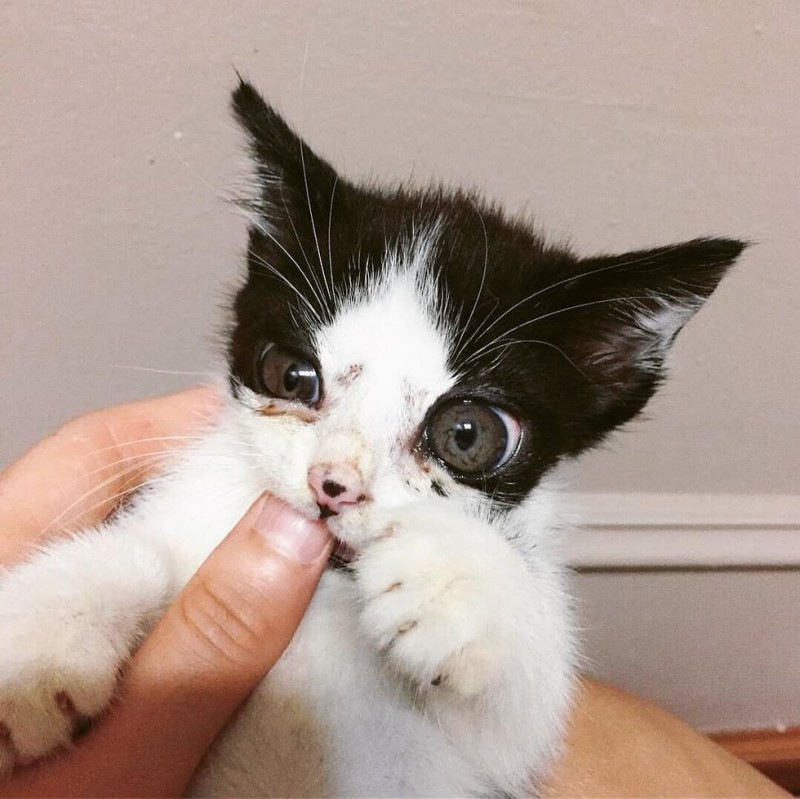 When it came time to make a decision about whether to keep the kitten or give it to a shelter, the veterinarian woman understood that this crumb requires special care. Its unusual appearance and huge eyes are probably some kinds of anomaly.

The woman named the kitten Porg. This is one of the heroes of « Star Wars », he also has huge eyes. 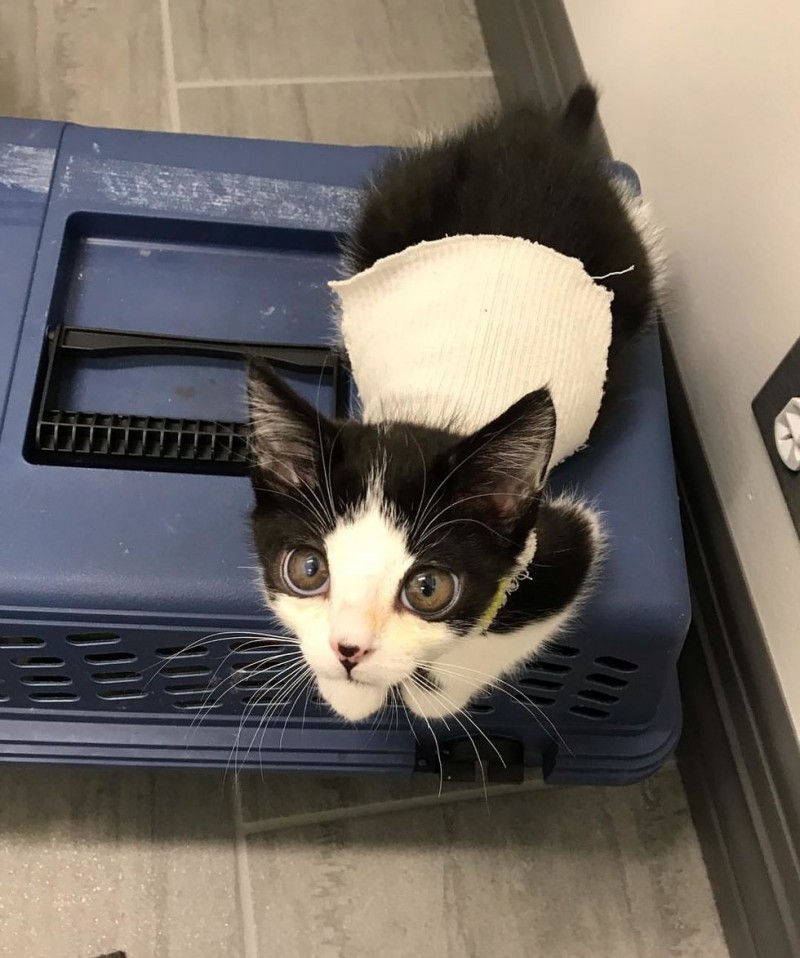 At first, the doctor thought that the kitten’s problem was connected with the eyes, but then she noticed that it also had unusual skin. The doctor took all the necessary tests from the cat. It turned out that it has Ehlers-Danlos syndrome. With this disease, animals have weak joints and flabby skin. Often, such a disease affects people, but as it turned out, animals also suffer from this disease. 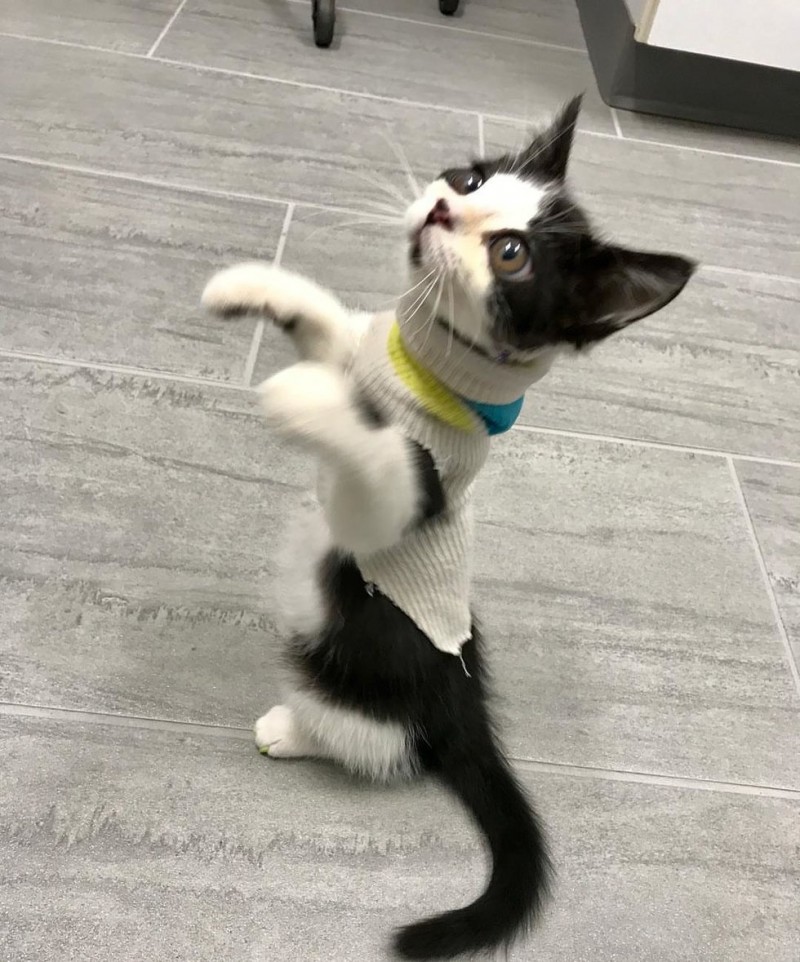 « I realized at first glance that this cat would live in our family, » says its new owner (a female veterinarian named Eliza). 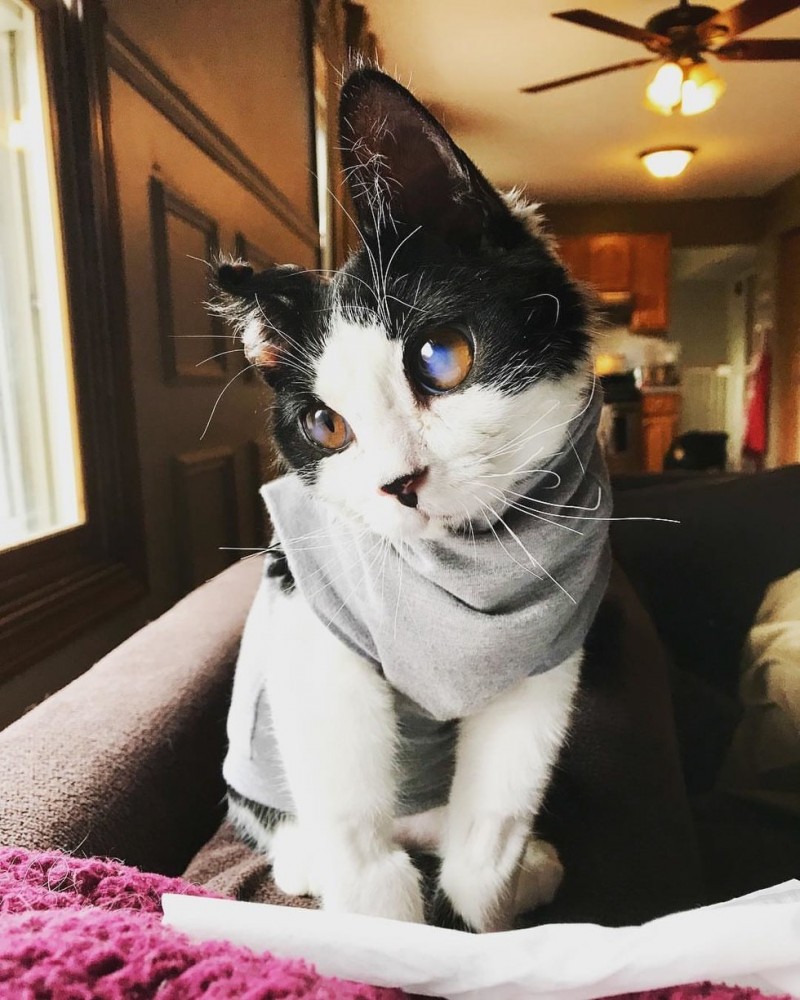 To protect the baby’s skin, Eliza sews special clothes for it. Also, she drips medicine into Porg’s eyes. Now the cat feels much better. It grows and develops. 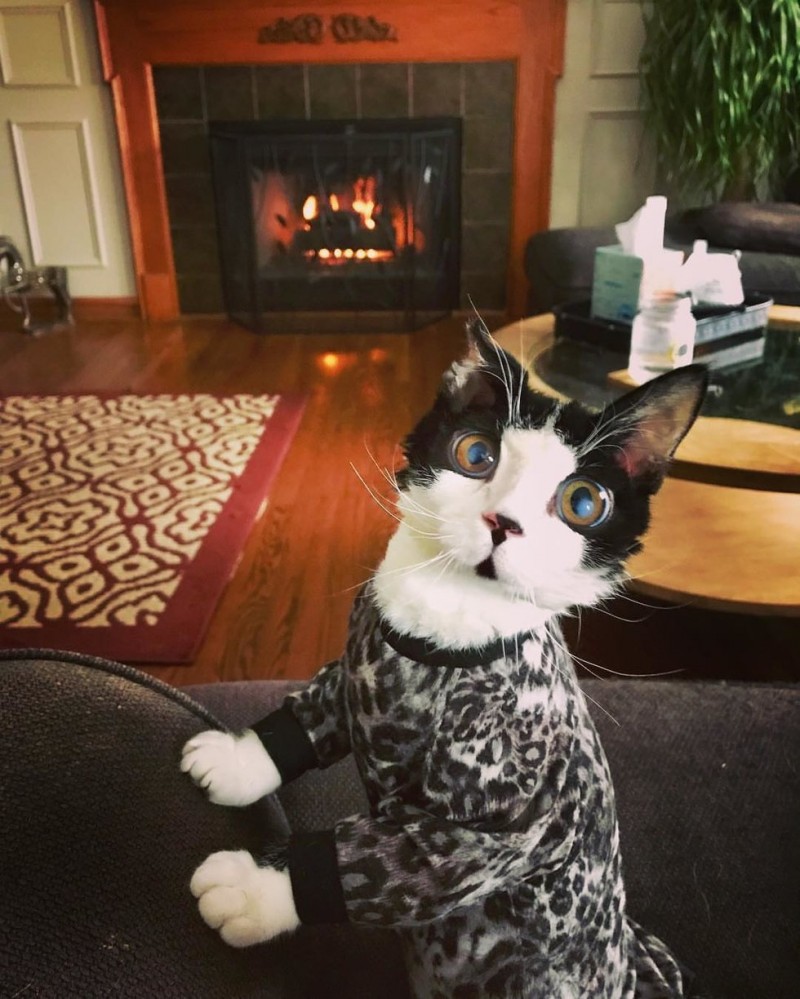 Now it has become an ordinary cat, no different from its fellows. The cat’s eyes remained the same large and expressive. Otherwise, it is difficult to distinguish it from other cats. 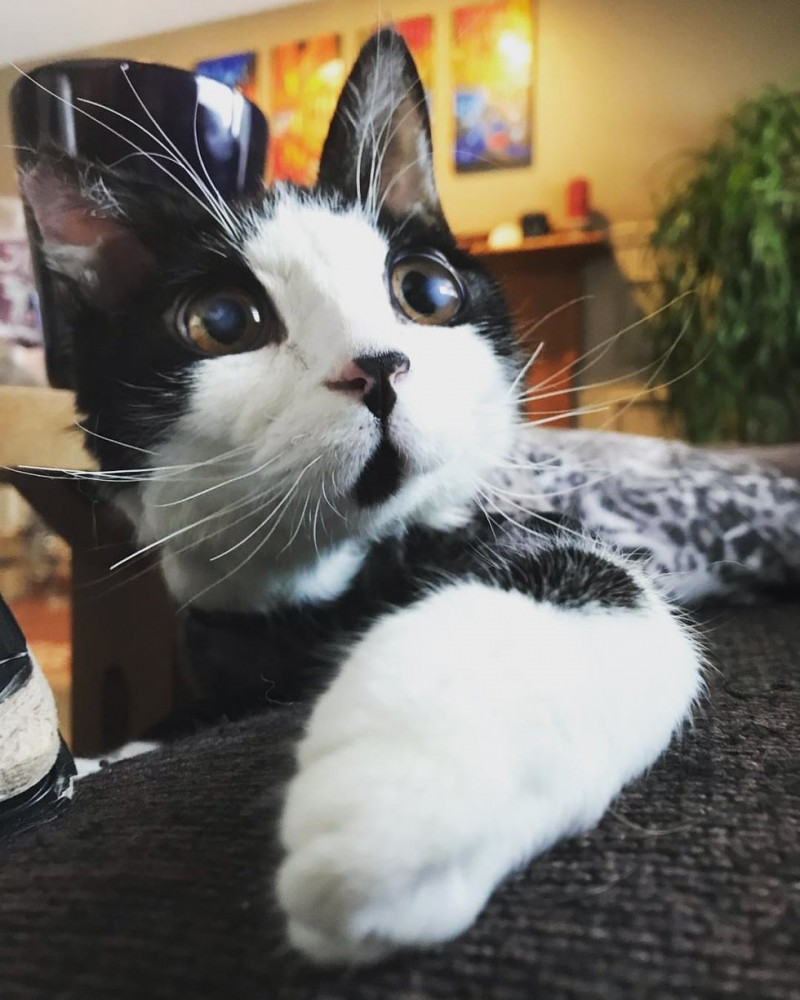 The cat is still wearing a protective skin suit. Eliza says that this is a unique cat.