There are many stories, rumors, and legends about the ability of animals to sense danger. Animals especially have this insight. There’s a lot of stories about how a cat’s intuition saved people. And we want to talk about that today.

The story began near an auto repair shop engaged in the maintenance and repair of all-terrain vehicles. The work was not easy, but to the delight of the workers, a tiny creature appeared in it once. One day, the staff arrived at the auto repair shop and found a white kitten sitting under the door, who was cold and hungry. The animal did not allow itself to be picked up, however, when the doors were opened, it quickly ran inside and hid under the battery. 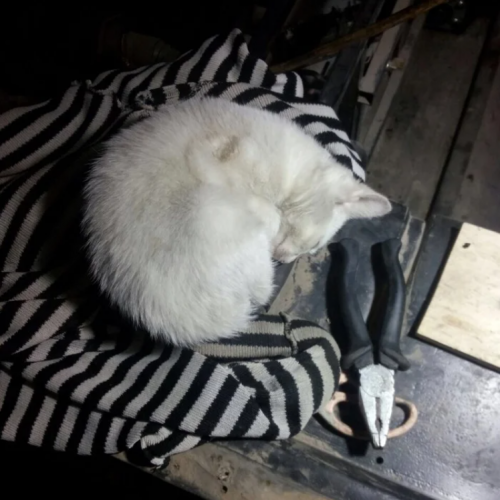 The kitty warmed up, they gave it something to eat and in the end, it stayed there to live. It loved all six car mechanics. The little girl brightened up the men’s gray working days with its presence. The mechanics joked that it was white and clean, and they were all smeared with fuel oil and oil. In addition to the fact that the cat controlled the work of mechanics, helping to check everything, it also saved the workshop from rats.

However, the cat not only gave workers love and got rid of pests, but it also saved several guys from a terrible fate on New Year’s Eve. Here’s what happened: customers brought an all-terrain vehicle to repair, in which it was necessary to adjust the exhaust system. The gates of the auto repair shop were closed because it was cold outside. Three young guys were sitting inside the all-terrain vehicle and then started the engine, then turned off, then started the engine again. Together with them, there was a cat inside the ROVER, as usual, it was engaged in controlling the process. At one point, the whole box was filled with CO gas, which has no color and smell, and in large quantities is deadly. Ventilation worked in the box and it began to be ventilated, but the gas in the all-terrain vehicle was still there. 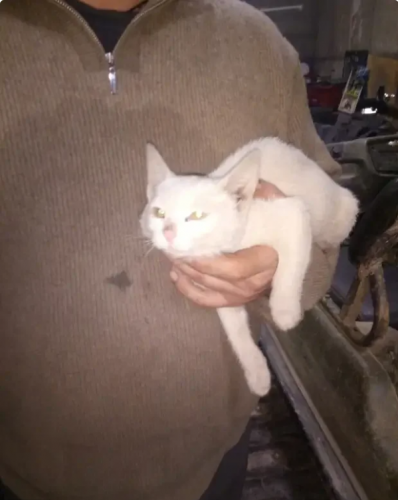 Then the kitty jumped up and began to meow loudly, then took a few steps and began to collapse. The guys also sensed something was wrong, as they began to feel bad. They ran out into the street, taking their savior with them. Of course, they managed to inhale the gas, and there were some consequences, but still not fatal, thanks to the cat. 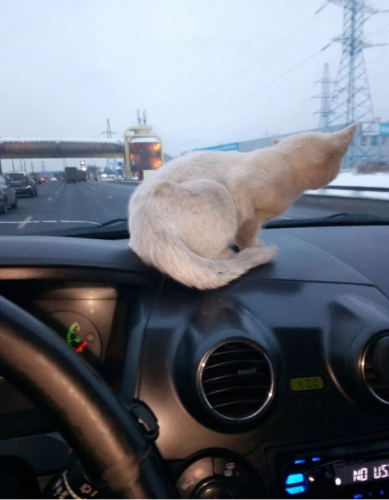 But the cat was then taken to live with one of the guys it saved. He called the pet Gerda, which means « defender of people » in Scandinavian. So now the kitty has a real home.