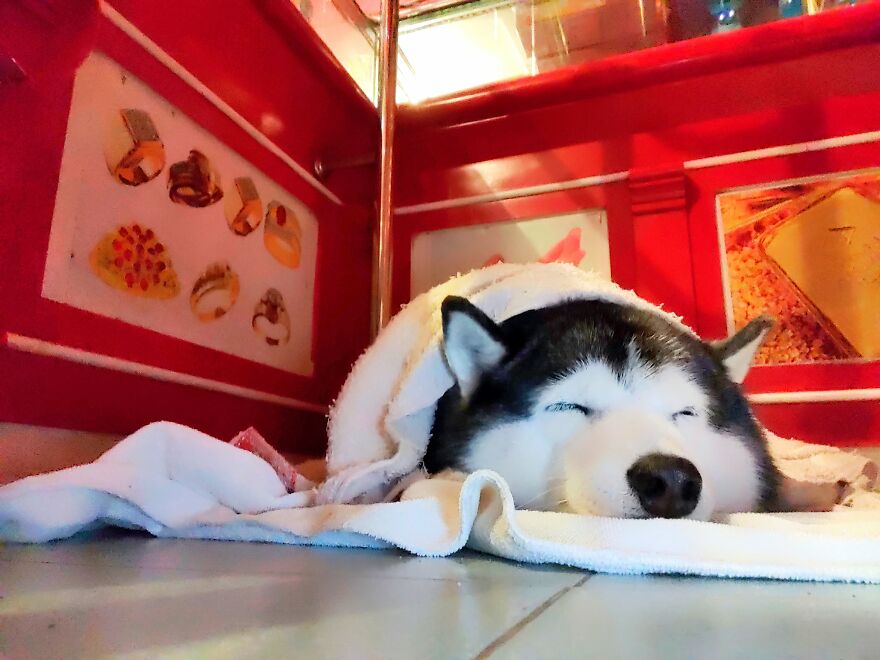 Dogs are amazing. They understand us, they make us happier, they love us unconditionally. They are absolutely our most loyal and brave friends, which is also the reason why dogs are often prioritized in security tasks. When people need an omnipotent guardian for their house, they tend to think of a dog.

A guy named Worawut Lomwanawong shares the same thought. He adopted a stray Siberian husky seven years ago intending to train her to be a guard dog for his jewelry store in Chang Ma, Thailand. He named her Lucky.

That name was meaningful since the husky had to be very lucky to have the chance to meet her owner. When they first met, the poor dog was starving and pregnant. She wandered hopelessly on the streets begging for food and then showed up at Worawut’s new store with terrible health issues.

The test failed miserably since Lucky was napping humorously through the whole staged armed robbery.

The video immediately went viral, and instead of blaming the dog, everyone finds her amusing. Lucky is literally adored and loved by so many fans now.

Explaining Lucky’s unexpected reaction during the test, Worawut insisted that Lucky was a smart dog who recognized the officer as he came to check his store, and she wouldn’t behave like that if it was someone else.