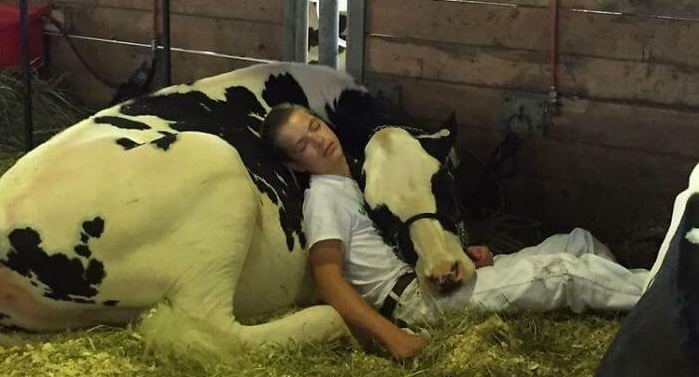 We have to admit that there was always something special in the relationship between humans and animals. By somehow, it can capture our hearts and touch our souls. For this reason, when a photo of a boy taking a sweet nap with his cow was shared online, it quickly went viral and took the Internet by storm. As it turned out, the boy in the pic Mitchell Miner and his cow Audri took part in the Iowa State Fair dairy cattle show. Despite working hard and trying their best, the duo finished fifth place out of seven other contestants. Due to being exhausted after the competition, Mitchell and Audri took a nap together inside a barn. Thankfully, his father, Jeremy Miner, came in and snapped a photo of them snuggling up while sleeping. Jeremy later posted the photo on Facebook, with the caption: “Our son Mitchell and his heifer after showing yesterday.” Laura Miner, Mitchell’s mother, told the Des Moines Register that the photo captured everyone’s heart because of its cuteness and sweetness.

“I think it’s just when you spend that much time with farm animals, they get really comfortable,” she said. Laura and her husband grew up on a farm, so they also wanted their children to connect to their roots. Because now the family lives elsewhere, they often borrow animals for the summer so that their kids can feel the farm life and the friendship between humans and animals.

“We learned a lot from the farm,” Jeremy said. “We have those values instilled in us, and we are trying to do what we can to preserve that.”