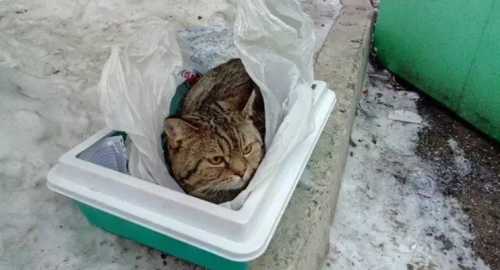 People don’t always act logically and consistently. For example, in the case of this story, the owner of the cat seemed to love his pet, well, or at least tried to help him. But on the other hand, this man acted incredibly strangely and cruelly.

Everything happened in 2017 in Krasnoyarsk. The New Year was approaching. A woman walking past the trash saw something very strange. There was a very ordinary cat toilet near the dumpster, wrapped in some kind of bag. And on top of this structure sat a British cat. There was a note next to it, in which it was written that the cat’s name was Leva and that the owner could not keep it because of the dog, which would definitely eat it. And a request to find it a new home.

The woman was imbued with this situation and called animal rights activists. A girl named Olesya, who arrived on the call, immediately took up the issue. Leva was taken to a veterinary clinic. The cat turned out to be perfectly healthy and strong.

Leva very quickly proved itself to be an affectionate cat, but this is not typical for its breed. It was left to live in the clinic until Olesya found a home for it. But the owner was found right there, less than a day later. One kind woman, who recently lost her pet, wanted to shelter Leva at home. Therefore, this wonderful cat has already found a new home where it is loved and cared for. 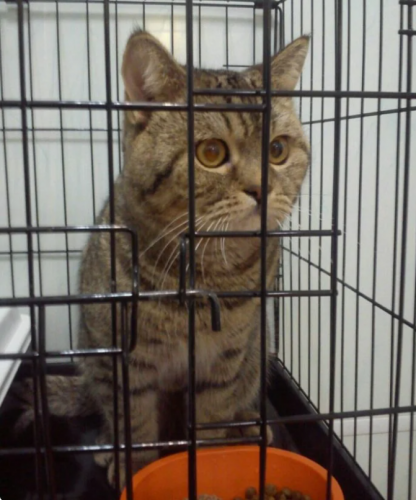 But the situation is still unclear. Yes, animals often get along badly, fight and threaten each other’s safety or even life. This often happens, alas. But what kind of monster would you have to be to throw out a cat like some kind of garbage, besides in winter? It was a very strange decision if Leva’s owner was so worried about it, as he tried to convey in the note. British cats do not tolerate the cold very well.

Temporarily Leva could stay with some friends or in a shelter. Why was it necessary to throw it away like that? It looks as if the owner simply took off all responsibility for solving this problem in this way. Maybe it will pass, maybe someone will take pity and take the cat, maybe everything will be fine. One solid « maybe ». And no problems. Unfortunately, a lot of people do this.