Friendship is one of the varieties of love, especially if the relationship has been maintained for many years. And if friends have lived a long period of their lives next to each other, then their connection is very strong. So our heroes of the article were together for 10 years, and as you know, for cats, this period is considered very long.

16-year-old Mars and his 11-year-old friend Modi lived for many years in the house of their owner. These tailed ones were together all the time, and their friendship became so strong that they could no longer imagine life without each other. However, the owners at some point could not continue to keep the elderly cats, so the cats ended up in a shelter. There, the friends were divided into different enclosures, and they became sad, missing each other.

None of the employees of the shelter hoped that someone would take the pets away. Especially both of them. After all, they were already old, and at this age, it is quite difficult to keep animals. People are afraid of such responsibility. However, a woman decided to take the younger Modi to her home. She learned about the history of the friendship of cats, but still refused to take the second one. 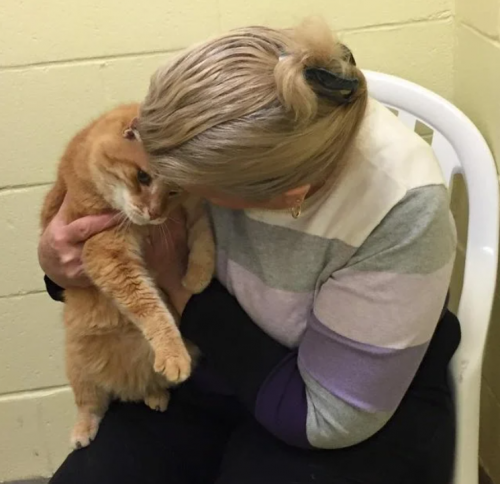 At home, the woman noticed that the new pet became even sadder than when it was in the shelter. It seemed to her that it was melting right before her eyes. It would lie down, look at the new owner and grumble something softly. But the woman still liked the cat very much, so she didn’t even think about returning it to the shelter. But the thoughts of taking away Modi’s friend began to appear more and more often every day.

So the staff of the shelter was surprised by the arrival of a woman who did not want to take Mars back then.

As a result, the two friends were together again. They have stopped being sad and adore their new owner.