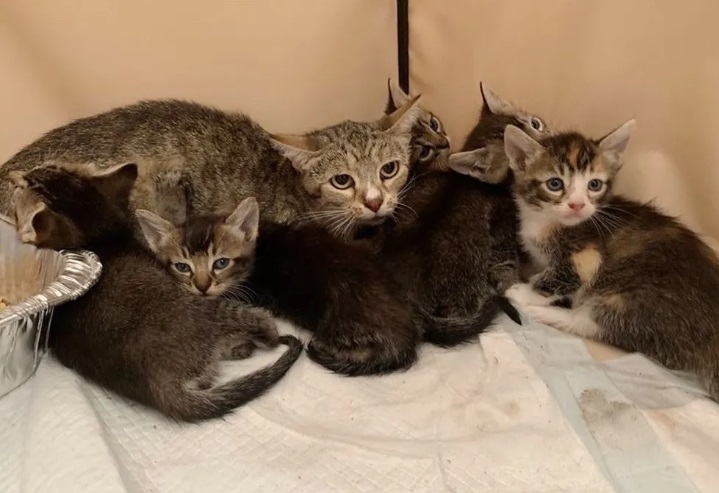 A yard cat appeared near the house of a lady. She didn’t come alone. A kind lady from Los Angeles helps local cats in her area by feeding them and working together with rescuers from Alley Cat Rescue to provide the necessary help.

Over the years, one of the cats had several litters. Despite all the efforts of rescuers aimed at saving them, many of them did not survive on the street due to the harsh conditions.

Rescuers have set humane traps in the hope of getting this elusive cat and sterilizing it. After several months of unsuccessful attempts, one kind lady found a striped cat at her door. This time she was not alone — on the porch with her lay a brood of kittens, which she fed with milk. The cat brought her children to the food source when they were old enough to wean them from the breast. She returned to the person who fed her so that her kittens would not starve. Rescuers from Alley Cat Rescue were able to transport the mother cat and her kittens to a safe place and place them in a temporary foster family.

« Mom hid the kittens for the first four weeks, and then brought them all to the woman who feeds her, » said Louise Holton. « We know how smart cats are, and they know where to turn for help.

This mother cat has been bringing litter after litter for many years. We are very happy that this is her last litter. » The wild cat is glad that she has found a safe place for her kittens and a lot of food for them so that they do not starve. After a few days in the foster family, the kittens thawed and began to recover — even hissing. They could not resist the food and sweets and began to enjoy the affection. Kittens are becoming more playful, confident and affectionate every day. When they are not chasing each other, they climb higher, fully enjoying their feline childhood. These happy kittens will not have to endure hardships on the street, they will grow up in a safe house. In a few weeks, they will be ready to embark on their next adventure – to go in search of a permanent family, where they will always be loved and pampered.

Their mother cat will no longer bear offspring — she was sterilized and put on a microchip, and also received medical care, which she desperately needed. A kind lady, to whom she brought her kittens, will take care of her. « Among the kittens there is one girl – « turtle » and four striped boys with an amazing color. » With the help of volunteers from Alley Cat Rescue and The Good Samaritan, these kittens are growing up healthy and are preparing to find a permanent home.