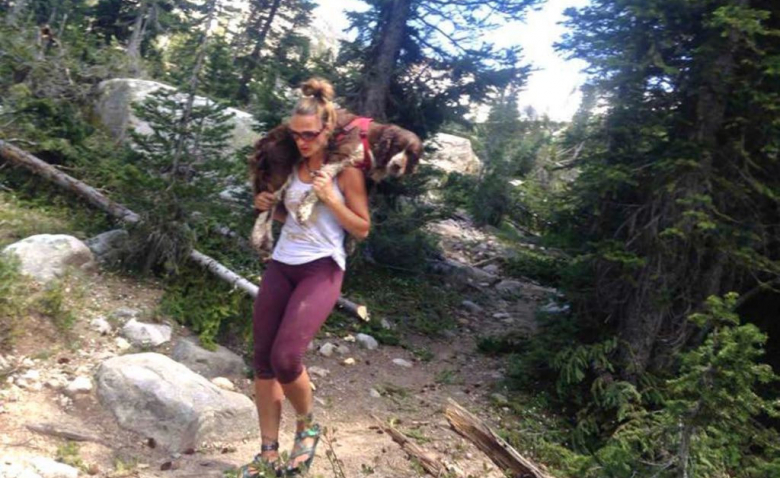 On July 4, 40-year-old Tia Marie Vargas, together with her father, climbed Table Rock Mountain in Idaho with a height of 3,385 m. At a height, Tia suddenly saw a dog.

Boomer, a 25-kilogram English Springer Spaniel, got lost the day before, walking with the owners and their children. Having got into a 30-meter ice crack, the dog was injured and barely moved.

« If it was my dog, my child, or someone I love, I would like someone to help them. I couldn’t leave him there to calm my heart, » Tia said in an interview with ABC.

« It was obvious that the dog was very dehydrated. His head and stomach were covered with cuts and scratches. He was in a bad state. »

Despite her fatigue, Tia, with the help of her father, lifted the spaniel on her shoulders, and they began to descend the mountain. This turned out to be a difficult task since the path that was chosen was littered with snow and debris.

« We lost our way twice and did not immediately find the way, » the woman recalls. « At some point, we were between two rivers, I could barely stand on my feet. We walked through the bushes, prickly branches scratched our feet. It started to rain, and I, exhausted, put the Boomer on the rocks, and I lay down on his stomach. »

The father supported his daughter all the way.

« He was joking, making me laugh, and I thought, it’s okay, I can do it. Then I prayed and, taking Boomer in my arms, I felt as if someone came up from behind and lifted the weight off my shoulders,  » Tia added.

After a six-hour endurance test, the woman finally lowered the Boomer to the foot of the mountain, where the owners left a sign about the lost dog, and Tia called this number.

« The owners of the Boomer were very worried, the children were crying, » she said. « They thought they had lost him forever. When I called, the first thing they asked was,  » Is he dead? » I replied that he was alive, and I heard a child crying. »

Tia said that the owners were looking for the Boomer for several hours until late in the evening and as a sign of gratitude for his rescue, they gave the dog to her!

Before the incident, they planned to sell Boomer as a hunting dog, but fate decreed otherwise, and Boomer will remain with his savior!