Not only people but also many other living beings can make friends. In the world of animals, you can see a huge number of quite original examples of friendship between the most unexpected types of animals that can touch the heart. Here, for example, is an example of friendship between a lion cub and a chimpanzee. Original, isn’t it?

These two, already bosom friends, were born at the Zoological Wildlife Foundation in Florida. They were attracted to each other from the very moment of their meeting and now they are simply inseparable, just like kindred spirits. The age difference did not prevent the two charming creatures from becoming close friends. 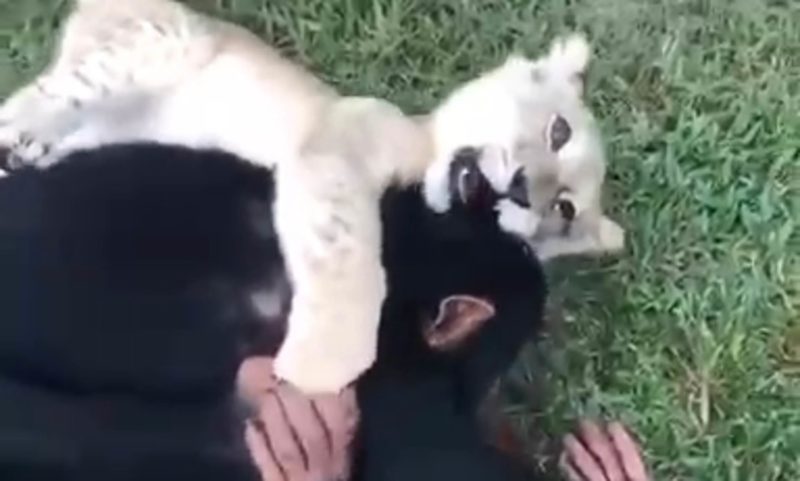 The chimpanzee Limbani is about three years old, but the lion cub Binte is quite a baby, he is only 5 months old. They play nice, jokingly fight and, if possible, spend all their time together.

Photos of two friends have conquered netizens around the world and it is simply impossible to remain indifferent to them. They are happy to lie on the grass, indulge, and cuddle like little children.

The sharp fangs of the lion cub can hurt the monkey, but it seems that the Limbani do not even worry about it, they continue to play, the lion cub can even bite it on the ear, but then they come up with other types of games. 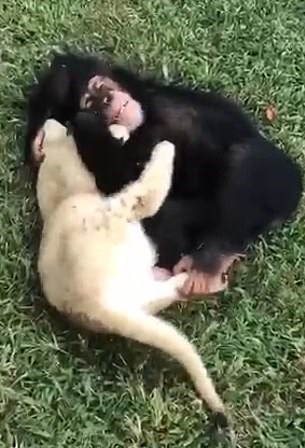 The games and entertainment of these charming animals are simply pleasing to the eye and, looking at them, it is simply impossible not to be surprised by the diversity of wildlife.

By the way, the chimpanzee Limbami has very high intelligence. It has many unusual hobbies. For example, it loves to answer the phone and draws.