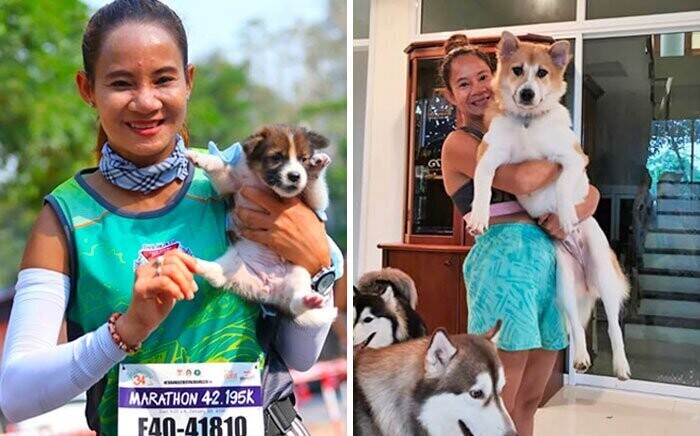 An incredibly cute story happened in Thailand. During a marathon race in the west of the country, a participant of the competition Khemjira Klongsanun saw a small puppy on the track. Noticing that all the competitors were running around him, she was afraid for him and took him in her arms.

She found him so cute that she ran the other 30 kilometers with him, taking him in her arms.

« It seemed to me that the puppy got lost. There were no houses nearby, no other dogs or people. So I took it with me. Running almost 20 miles with a dog in your arms is not an easy test. It’s twice as tiring as a regular marathon, but I went for it because the puppy is very cute, «  the athlete said after the finish.

At the finish of the race, the runner tried to find the owners of a small bangku puppy, but no one responded. And then she decided to take him to her home, having got a cute pet.

And now little bangku has become the second dog in the house of Khemjira Klongsanun.