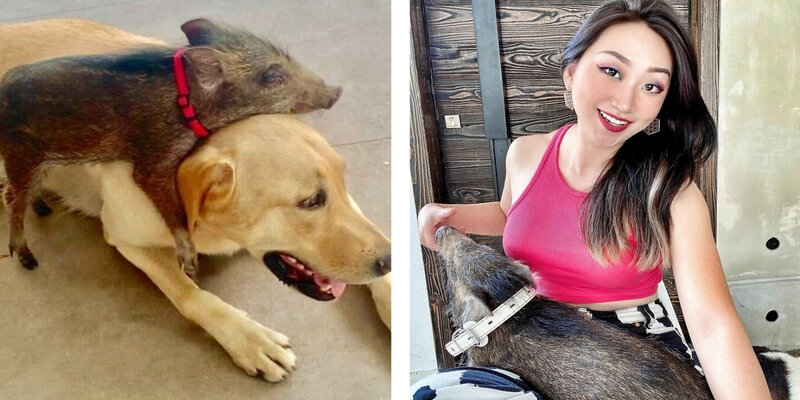 You never know what fate will throw at your doorstep. It may be a box, but not a package from Amazon, but something completely different — a box with a small boar inside. Yes, you read everything correctly — it was a boar.

And this actually happened to Dora Ngai, a video blogger from China who lives in Sri Lanka with her boyfriend and 4 cute dogs. This truly curious case occurred on September 3, 2020, when almost the entire world was already in quarantine. Then Dora was in isolation in her house, she suffered from boredom when a box with a wild boar inside turned out to be next to her house. Dora’s gardener found a box and brought it to her. And the rest is a story that will be told by none other than Dora Ngai herself. So, let’s get started!

Meet Dora Ngai, a Chinese woman and a video blogger from Sri Lanka, and Yezhy the wild boar. « I am Dora from China, and I live in Sri Lanka with my boyfriend, whom I have been dating for almost 4 years. At the moment we have 4 dogs. 3 of them were taken from breeders. We live in a small town called Kandy in a hilly area, and here you can meet a lot of animals: monkeys, wild boars, porcupines, peacocks, and many others. »

« It was September 3, 2020. Early in the morning, my gardener found a baby boar near my house. She was only a few hours old. She was separated from her mother, lost and frozen. So he brought her and gave her to us to take care of. »

The gardener found Yezhu in a box. At that time, she was only a few hours old. Yezhu was separated from her mother. Unfortunately, the chances of survival of wild boars without them are negligible. « The first 4 weeks were hard and tiring. Because of COVID, we were constantly at home, so we had time to take care of her. We started feeding her cow’s milk, but on the 3rd day, she got sick and became very weak. I asked how to take care of wild boars, and everyone said that it’s not so easy if they are so small and that they always die without a mother. »

Despite the high chance of death, Dora was determined to keep Yezhu alive. « But we were still determined to keep her alive. We started feeding her with a milk substitute for puppies, and she got better, after which she began to slowly recover. We read on the Internet that she needs to be fed every hour, after which for almost the first 4 weeks, my boyfriend and I took turns sleeping with her in the living room, feeding her every hour when she woke up and started crying. For us, it was really like taking care of a child. »

They took care of her as if she were their own child. « We kept warm water bottles next to her to keep her warm, and equipped her with a small corner for sleeping in the living room. »

She managed to survive and go through all the difficulties, after which she was already ready to get acquainted with the four dogs. « We were very happy with her, but we didn’t know how the dogs would react to her. » The Labrador named Biubiu hesitated at first, but soon he also established a connection with her. They started eating, sleeping and playing together, and now they are best friends. Boars have poor eyesight, but Yozhu’s is even worse, because she is blind in one eye, which means that she would hardly be able to survive in the wild. « In the end, when she got bigger, we built her own house with a small pool. She loves water. » She is a happy pig, Yezhu is never bored. And Dora is also very happy with Yezhu. Months have passed, and now Yezhu has grown up and turned into a very big boar. She is as big as a Labrador, maybe even bigger. Now Yezhu has a new family, and she is quite well.