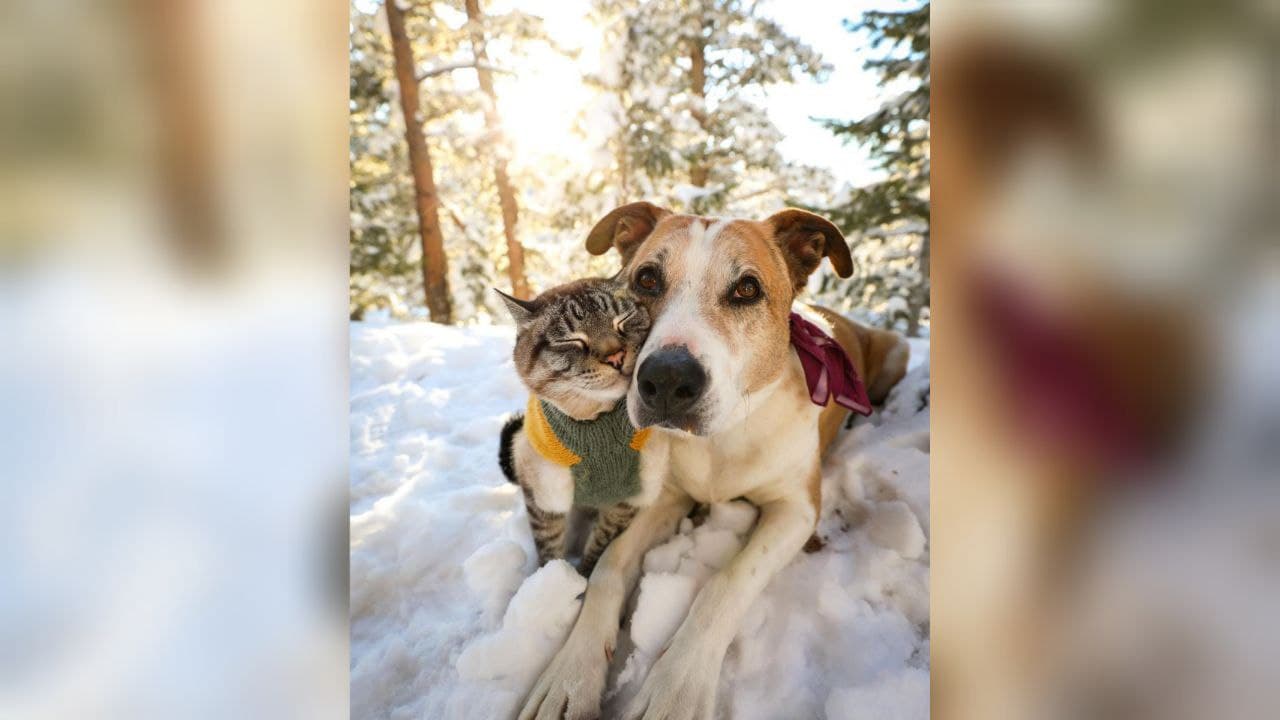 Solo travel is enjoyable, but a few companions won’t hurt. And if you love traveling and you also love animals, dogs and cats can be perfect travel buddies to fulfill all your wishes. Especially when you have both your cat and your dog accompanying you, the fun will be doubled.
Meet Henry and Baloo, an unlikely duo that makes their parents’ trips way more significant and amusing. If don’t believe in the friendship of a dog and a cat, Henry and Baloo are here to prove that you’re just totally wrong. The two inseparable companions were obviously meant to meet each other. 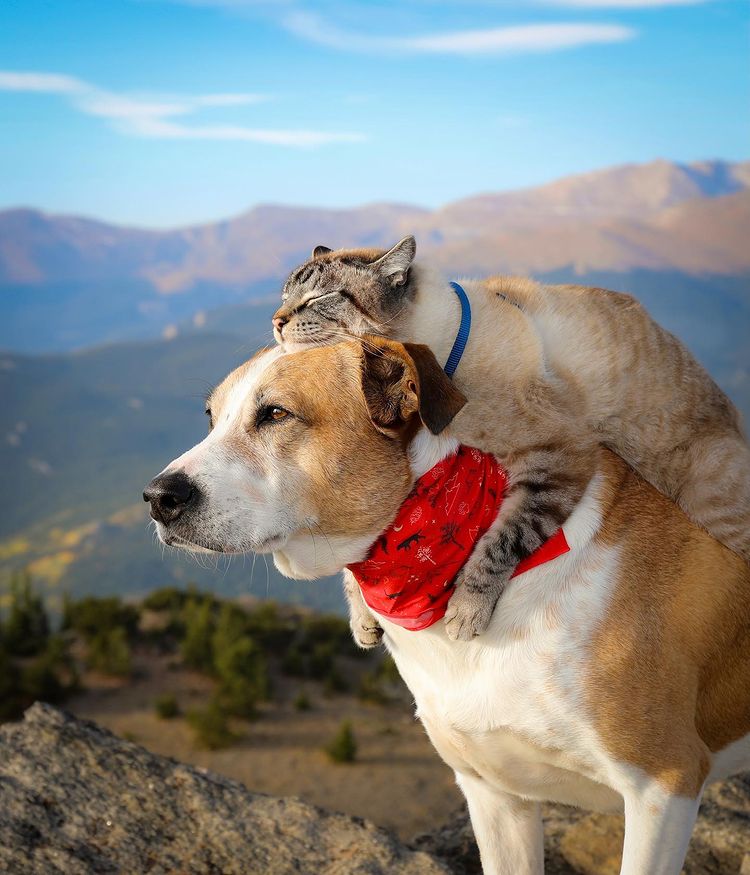 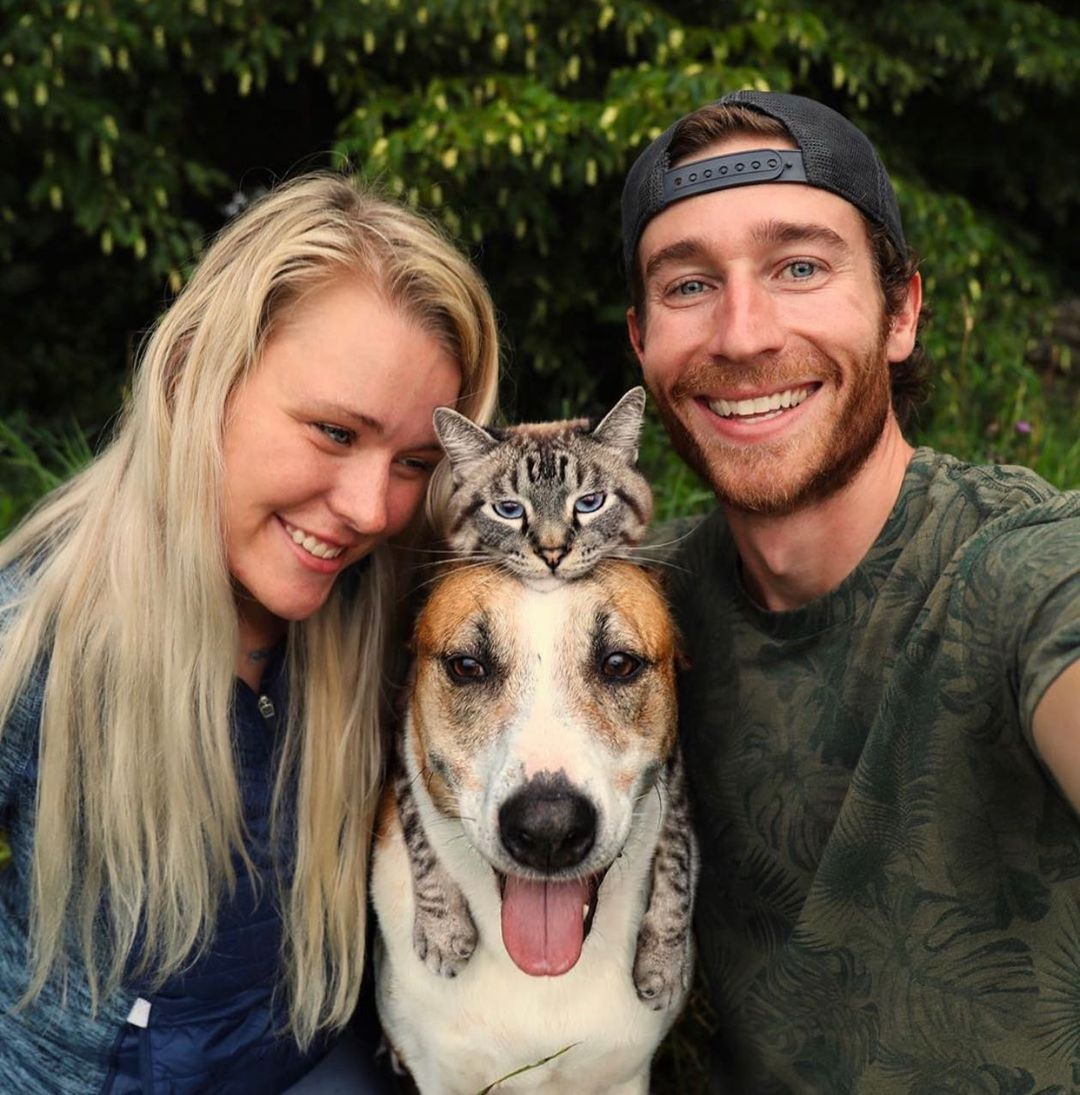 The lovely four-legged hikers have been travelling alongside their owners Cynthia Bennett and Andre Sibilsky for several years so far, and their adventurous trips are all fascinating and memorable. Baloo helps calm Henry’s separation anxiety, while Henry offers Baloo his back (or his head – Baloo’s favourite spot) to rest on whenever the cat’s tired during long journeys. The two love doing everything together, and the moments they share are simply extraordinary.

Thankfully Henry and Baloo’s mom Cynthia is a professional photographer so even when we’re not there to witness their beautiful moments with our own eyes, we could just sit still and admire their stunning photos on the internet. The Instagram account of the striking cuties has gained over 2 million followers, making them two huge stars on social networks. 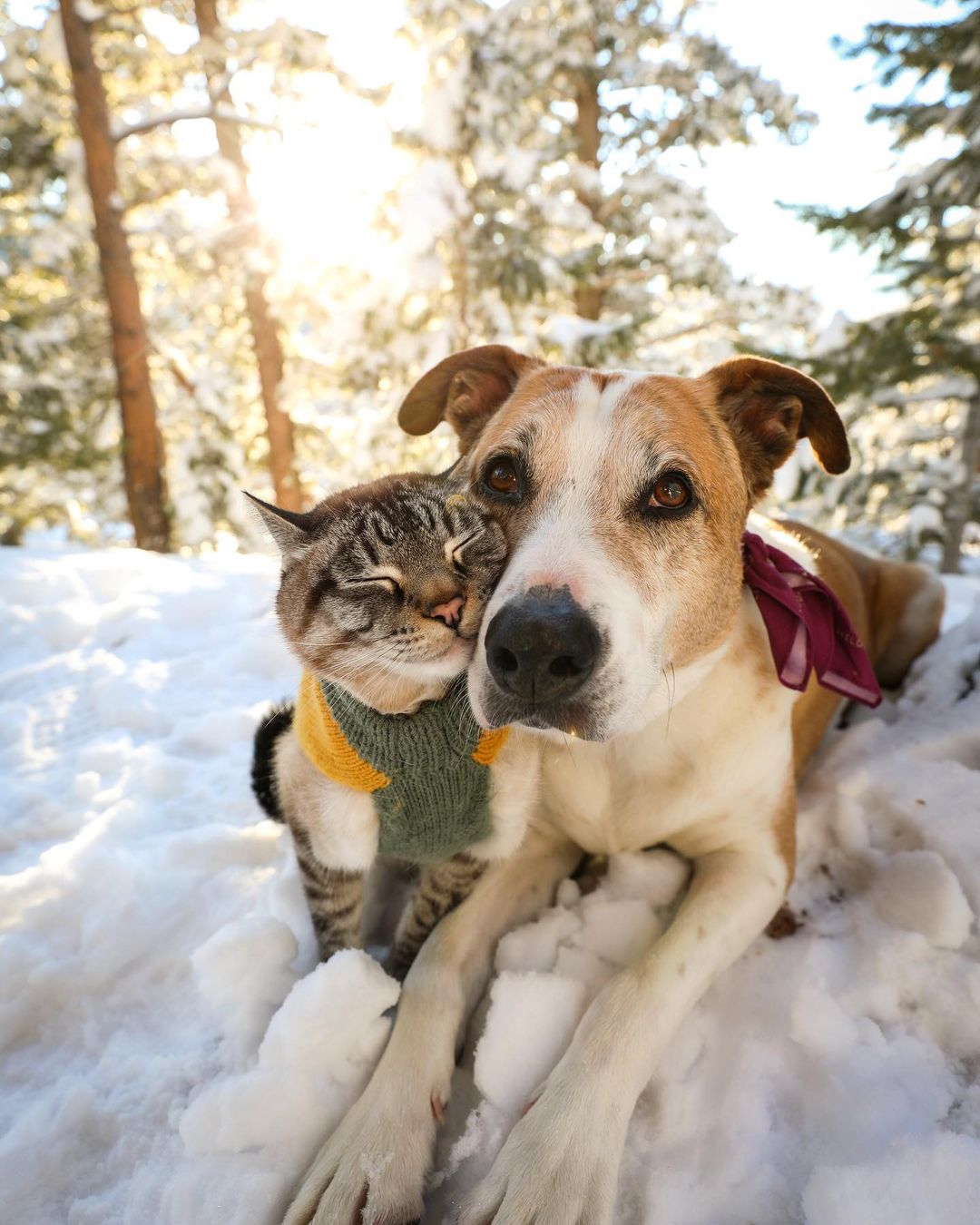 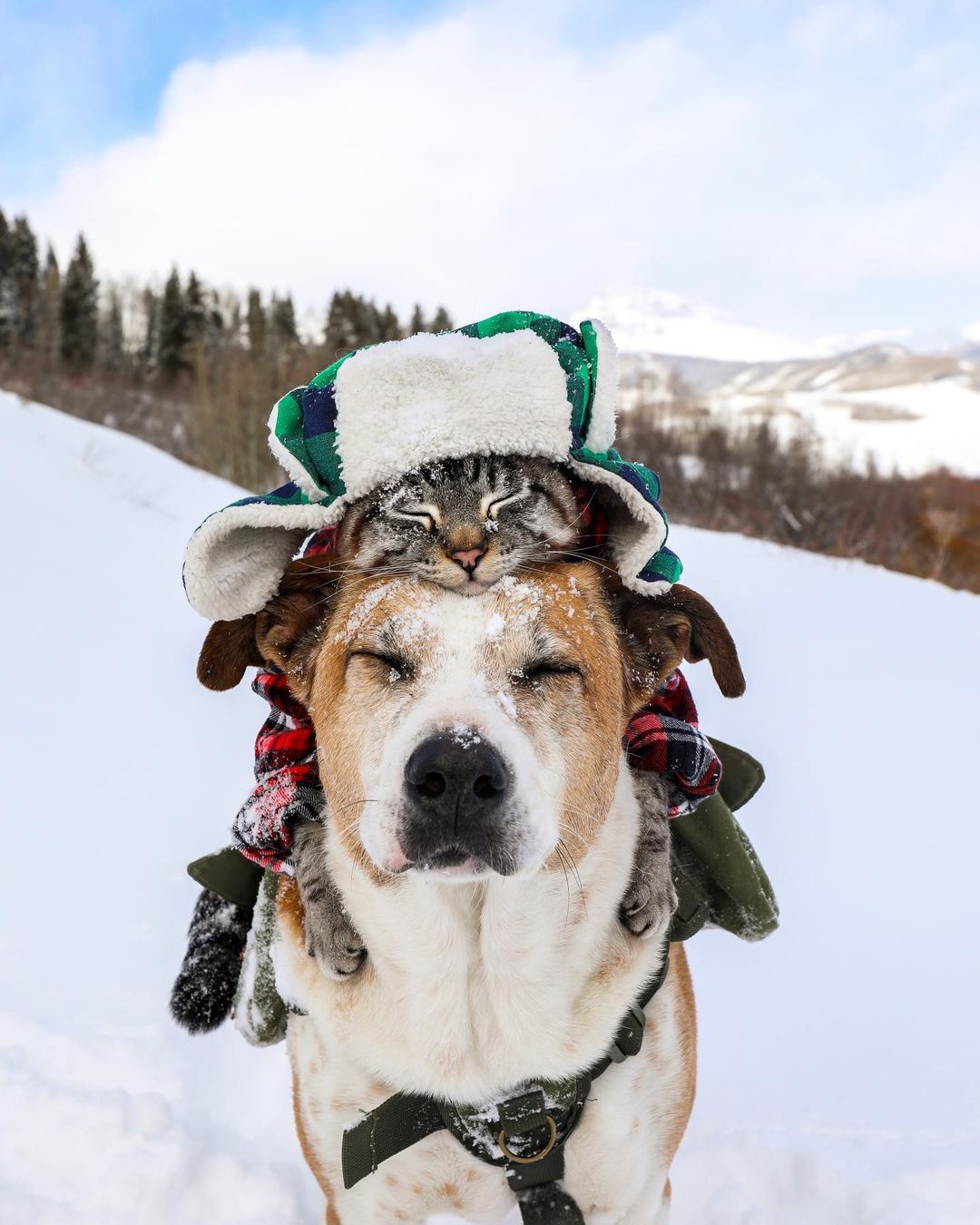 Little did people know, both of them were adopted from animal shelters. Henry was the first one to join Cynthia and Andre on hiking trips as they adopted him back in 2014 when the little puppy was only over three months old. The couple was looking for a strong, lively, and energetic buddy to take part in their adventures, and Henry was a perfect fit.

“Our story really began when we adopted Henry, formally known as Buttercup when he was just 3.5 months old,” Cynthia shared on their website Our Wild Tails. “He convinced us to take him home within seconds when he crawled into my lap going belly up right away. We took Henry on his very first hike that week and immediately he scaled the steepest rock to get a better view.” 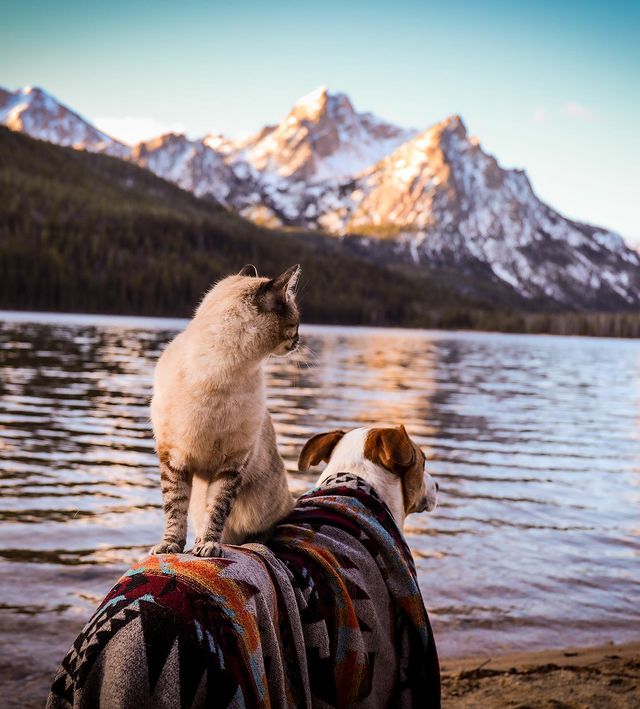 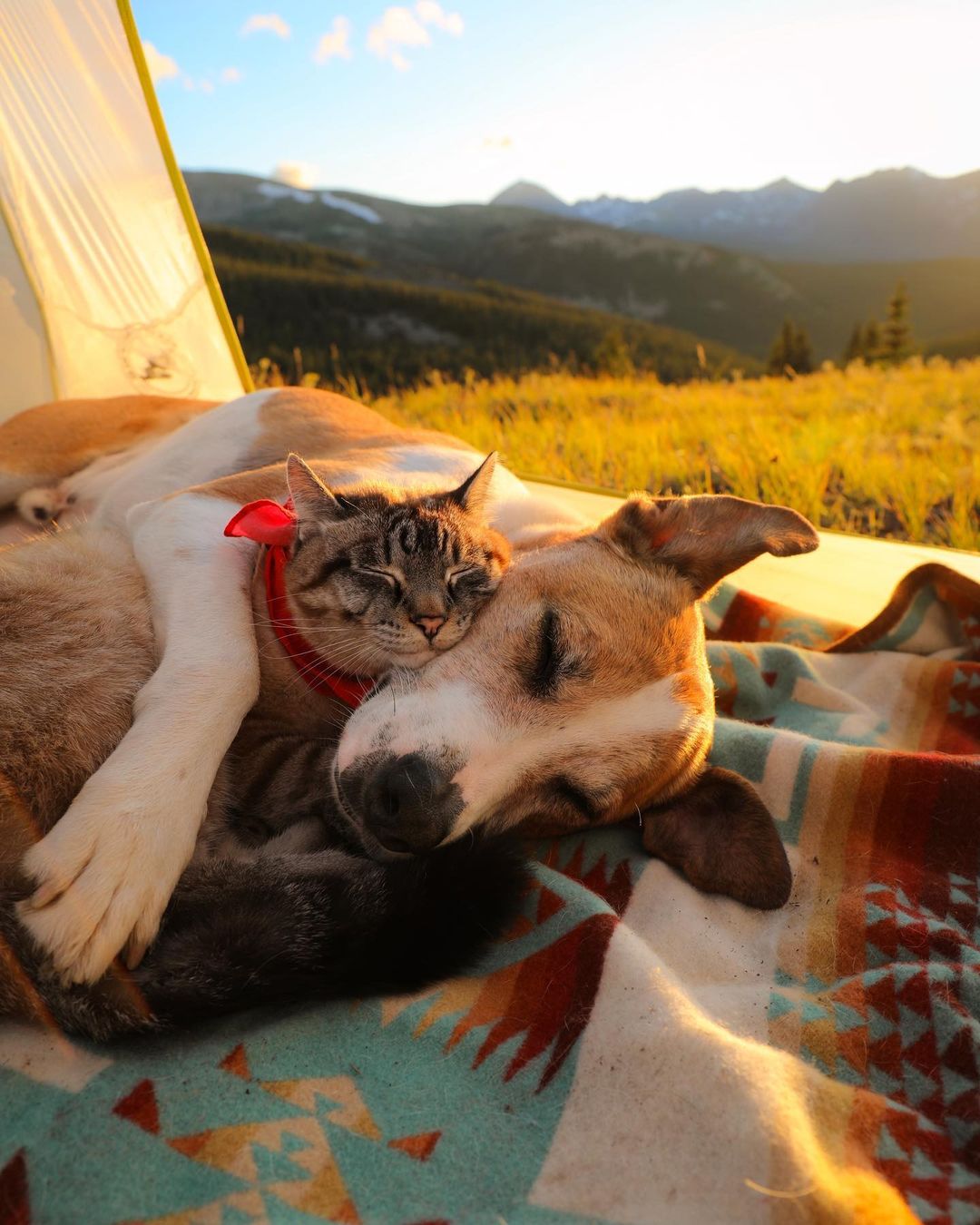 “This was the mountain dog we had been dreaming of,” she continued. “Two and a half, adventure filled years later and Henry’s love for the outdoors only grew stronger.”

In 2017, the small family welcomed their new child Baloo. Things were not easy at first. It took the couple three months to finally find Henry the most suitable companion to help with his mental disorder.

“As I walked into his room, he was the first out of his litter to jump off the chair and run up to me, begging to be picked up,” Cynthia wrote about Baloo. “During the hour I spent getting to know him we played, snuggled, and bonded. He was absolutely perfect for our family. I adopted Baloo that day and as I walked out of the room to fill out the paperwork, I turned around to see Baloo standing up on the glass door staring out at me.”

Cynthia was a little nervous about how Henry would react in front of his new friend, and it turned out there was absolutely nothing to worry about. They love each other more and more after each trip, and their impressive friendship definitely won’t just stop there!

Please share this adorable story of Henry and Baloo with your loved ones!