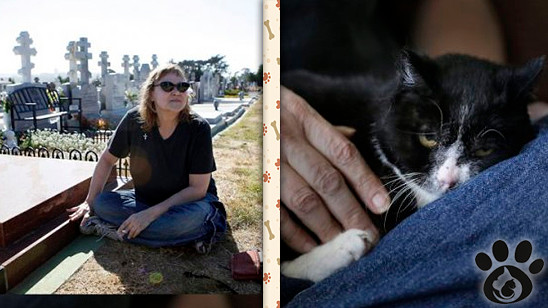 Roza Katovitch and a black and white cat named Miss Tuxedo found each other in the most unexpected place – in a cemetery in the town of Colma, California.

In 2000, Katovich lost her boyfriend Rich, who died due to a heart aneurysm. Her father died three days later. Heartbroken, she fell into a deep depression, became ill, and eventually lost her job. A few years later, Katovich lost her apartment when her building was sold.

Homeless and with worsening depression, she spent most of her days at Rich’s grave in Colma. It was there that she met Miss Tuxedo.

The cemetery in Colma is home to many wild cats that hunt ground squirrels and other rodents. Katovich knew most of them by sight and a few by name. While wildcats are not overly friendly to people, it seemed that Miss Tuxedo needed Katovich as much as Katovich needed her.

Thanks to the fact that she spent time with Miss Tuxedo and took care of her, Katovich stopped feeling so lonely and even began to forget about her grief. Soon, she applied for affordable housing and won an apartment in a residential complex near San Mateo. Who lives with her? Miss Tuxedo.

« I got permission to bring it, » Katovich said. « My doctor said that my life depended on it. I think that’s actually the case. »