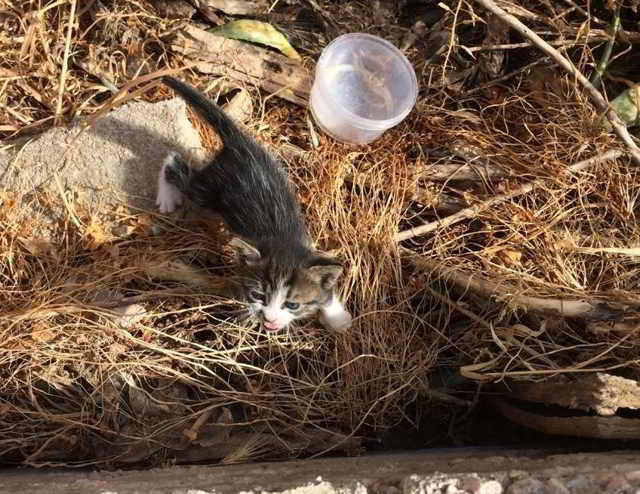 Vika Sarieva did not remember such a cold summer in her entire life. Even for a short walk with a group of friends, she took a warm autumn jacket. It’s a miracle that the young people went for a walk at all.

A miracle and happiness, because the girls heard the squeak of a small kitten and rushed to look for the baby.

Maybe they even imagined it? They searched all the bushes, looked into all the holes. But in the end, they found the cat in a hole near the river. The kitten was hiding in this hole from the cold, but it was still shivering: it was soaked from head to toe in the damp grass. The kitten was squeaking plaintively, its voice was hoarse as if its mother had not appeared for a long time. « Or maybe his mother wasn’t here? » Vika suddenly thought. « There’s a bowl over there, maybe it was just thrown away? »

The girl reached out to the baby, wrapped it in a warm jacket, and carried the foundling home. On the way, she wanted to buy cat food at the store. But as soon as she was distracted, the warmed-up baby broke away and rushed back towards the pond.

The girls didn’t want to give up so easily. They went out to catch a sneaky little guy, and Vika had to follow him down the river barefoot. She was oblivious to the icy water: the little kitten was even more frightened.
They searched the neighborhood for a long time, it was already getting dark. They did not found the baby.
Vika is a persistent person if she decides to save a cat child, so be it. Victoria means victory. She found the baby the next day when the hungry cub began to squeak again. It wanted to be in warm and gentle hands, but it was still afraid of the girls. The little cat kept running away, even the passers-by were surprised. A few hours and skinned hands in nettles were the price of saving a small stupid animal, but it was worth it.

Vika finally caught a fugitive and took it home. The kitten turned out to be nice but skinny.
0 283 views
Like this post? Please share to your friends: