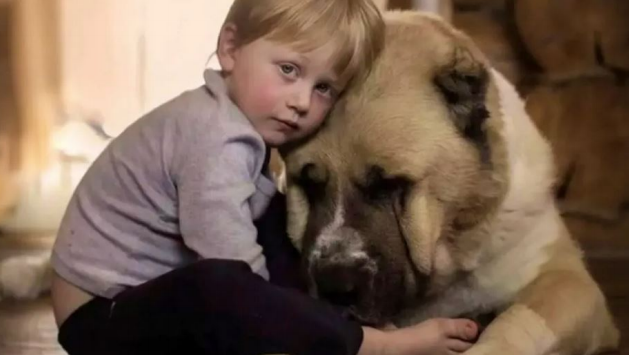 These stories about pets are sometimes funny, sometimes sad. But some of them are hard to believe. Sometimes even people aren’t as noble and wise as they are. Here’s one of those stories, very hearty and kind.
There was a dog in an American family. Its name was Shrek.
The dog was already many years old, but it considered every day happy. The owners loved it, did not spare hugs and affectionate words, and the dog reciprocated them, protected the house and yard. When the children were born, it guarded them, they learned to walk, holding on to the thick fur of the dog. No one dared to offend the kids when the old dog was around.
But the years are not merciful to the big dogs, their lives are short.
So old age with diseases crept up on the old dog.
When it was diagnosed with a tumor, the doctors said:
« With a tumor like that, he might live a few more years, but when the pain comes, you have to deal with it. No need to torment the dog in vain. »
The owners treated the dog, tried all available ways to save the pet, but who won from fate? When Shrek became very ill, when he cried in pain, the adults realized that they had to do the last thing in their power for the pet. But how can they tell the eldest child about this?
« Son, » the father said to the child, « it’s time for Shrek to go to a shelter where old dogs are treated. He can’t live at home anymore, do you see how bad he is? And there he will be fine. »
The boy was told that he can’t come to the hospital to visit, so he needs to say goodbye to a friend.
The child cried all night, and in the morning his parents found him in the yard. Friends were lying next to each other, in an embrace. The dog put his muzzle on the boy’s legs as if saying goodbye. When the parents opened the door, the dog suddenly went past the child into the children’s bedroom. There was a younger baby sleeping in a crib.
The dog came up to the crib with difficulty, bumped his head into her palm, and lay down next to her. He closed his eyes and stopped breathing.
That’s how the dog said goodbye to his beloved people. They buried him near the house, and the boy often comes to visit the dog.
0 472 views
Like this post? Please share to your friends: