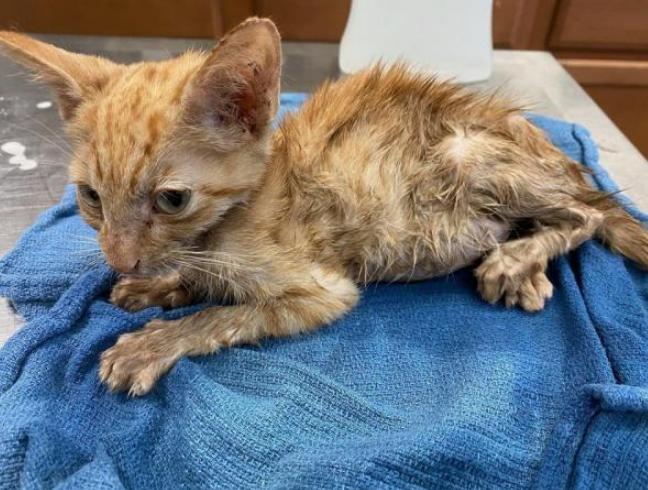 A caring girl shared photos of the kitten after its rescue. She posted two pictures a month apart, and the miraculous transformation surprised and amazed everyone.

The girl with the nickname Justrandom33 is one of the users of the social network Reddit. She posted a photo of the kitten she had saved on her account. In the first picture, the animal looks exhausted and frightened, and in the second photo, it is impossible to recognize.

Justrandom33 is a volunteer with a good soul. The girl regularly helps different animals, care for them and finds new caring owners and home. On her account, you can see a lot of rescued pets. These are the same cats and dogs of different ages and breeds, which under a variety of circumstances got to Justrandom33. But the photos prove that the fate of absolutely all wards is changing for the better.

In early September, the girl accidentally noticed a small furry creature in the landfill, in which it was difficult to see a kitten. The tiny animal was so emaciated and weakened that it actually looked like a skeleton, covered with skin and fur. Justrandom33 realized that the cat needed help, so she took it away without thinking and began treatment and rehabilitation. The new ward was named Chester.

Four weeks later, in early October, a photo with Chester appeared on the page. In this beautiful fluffy and very strong cat, it was very difficult to recognize the creature that was discovered by a volunteer just a month ago. Chester looks perfectly healthy, calm, and happy.

Subscribers of Justrandom33 left a lot of comments. They all admired the girl’s kindness and care and were glad that Chester had come to her. Commentators sadly recalled what a kitten was just recently, and wrote about his amazing transformation. But it was not the cat’s appearance that particularly touched everyone, but its look. In the first photo, the eyes were very sad and scared at the same time, and now Chester is absolutely happy, and calm. It’s perfectly fine thanks to Justrandom33.