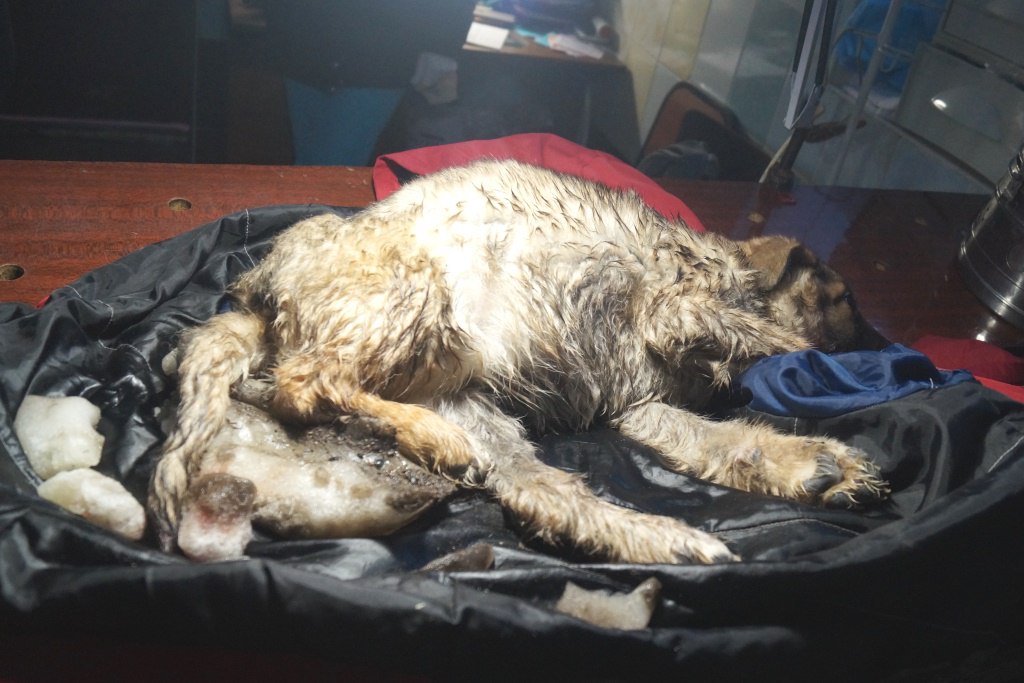 This tragic story with a happy ending occurred in Omsk. On December 29, the man was driving his car when he saw two unfortunate and abandoned puppies on the side of the road. They were probably brother and sister. He could not take them to his home, but he stopped the car to feed the poor puppies.

Holding the food in his hands, he called the dogs. But they didn’t move. The man came closer. No one ran up to him anyway. And as soon as he leaned over the puppies, he realized what the problem was. One of the dogs was styrted to the ice. The girl couldn’t move.

The wounds on her body indicated that she had been hit by a car. Most likely, after a collision with a car, the puppy crawled off the road and lay down on the side of the road. That’s where she got trapped.

The second dog did not abandon the wounded sister and stayed with her. He was certainly trying to free her. However, the only thing the puppy could do was to warm her with his body. Two pooches were threatened with a terrible and painful death from hunger and cold.

A man could not pass by this trouble. The man pulled an ax from the car, broke the ice around the dog, and pulled the pooch out of the ice captivity. He took both of them and brought the dogs to an animal kennel called « Friend. » Despite the fact that the nursery would be overloaded, the staff of the shelter could not refuse to take the poor puppies to themselves.

The girl is feeling much better now. She still has a rehabilitation course, but all the worst is behind. She and her brother are now warm and surrounded by care.

Thanks to a caring man, two small lives were saved. Separately, I would like to note the devotion of the brother of the rescued girl. He could have gone quietly. His life was not in danger. But the puppy did not want to leave the relative. In the body of a small dog is pounding a huge heart.